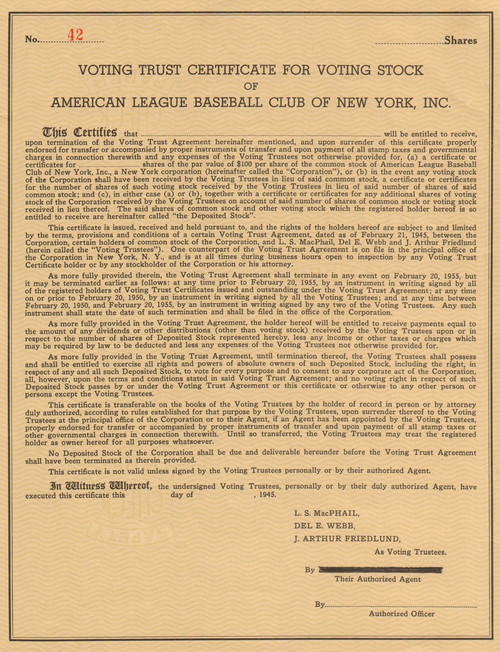 Very rare piece of Yankees history in this unissued voting trust certificate.  This was a corporate issuance for the corporation that controlled the Yankees.  Dated 1945, this is a real find for the Yankees collector.  This would make a top notch gift.

Printed names of trustees are L.S. MacPhail, Del E. Webb, and J. Arthur Friedlund.  Webb was an American real estate developer and a onetime co-owner of the New York Yankees baseball club.;  Friedlund was affiliated with the Yankees as secretary and general counsel during all of the Topping-Webb regime, Art Friedlund is a successful Chicago attorney.; MacPhail was a baseball executive for 45 years, serving as the director of player personnel for the New York Yankees, the president and general manager of the Baltimore Orioles, chief aide to Commissioner of Baseball William Eckert, executive vice president and general manager of the Yankees, and president of the American League.

Voting Trust Certificate  - A certificate issued by the limited-life trust of a corporation established to limit the control of a corporation to a few individuals. A voting trust certificate is issued to a stockholder in exchange for their common stock, and represents all of the normal rights of a shareholder except the right to vote. The life of a voting trust certificate is usually limited to five years, at which point the common stock, with voting rights, is returned to the shareholder.

The New York Yankees are an American professional baseball team based in the Bronx, New York City, New York, that competes in Major League Baseball (MLB). They are organized in the American League's (AL) East division. The Yankees are one of two MLB clubs based in New York, the other being the New York Mets. The club began play in the AL in the 1903 season, after owners Frank Farrell and Bill Devery purchased the defunct franchise known as the Baltimore Orioles (not to be confused with the modern Baltimore Orioles) and moved the team to New York City, naming the club as the New York Highlanders. The Highlanders were officially renamed as the "Yankees" in 1913.