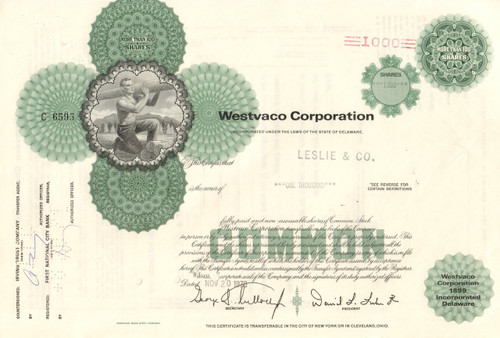 Unique stock certificate style with green medallions and featuring a nice vignette of a modern shirtless man lifting a log on his shoulders.  Issued and cancelled. Dated in the 1970s.

Incorporated 1899, the company merged with Mead to become today's MeadWestvaco (MWV), based in Richmond, VA.  The company is now WestRock after a 2015 merger.

MeadWestvaco Corporation is an American packaging company based in Richmond, Virginia. It has approximately 23,000 employees. In February 2006, it moved its corporate headquarters to Richmond, Virginia. In March 2008 the company announced a change by which it would use "MWV" as its brand; however the legal name of the company remains MeadWestvaco.

MeadWestvaco announced in January 2015 that it would form a combined $16 billion company with RockTenn to form the 2nd largest packaging company in the US. The new name will be called WestRock Company and will be based in MWV's headquarters in Richmond. MWV shareholders will get 50.1% and Rocktenn shareholders will own 49.9% of the new company. Rocktenn CEO Steven Voorhees will be the new CEO of WestRock, while John Luke Jr. will take the role as non-executive chairman.

MeadWestvaco is a producer of packaging, specialty papers, consumer and office products and specialty chemicals. The company has 153 operating and office locations in 30 countries, and serves customers in over 100 countries. The company’s paperboard, package and paper brands include Carrier Kote, Custom Kote, Printkote, Tango, Digipak, Amaray, Dosepak and Vision. MeadWestvaco holds leading positions in the markets it serves. MeadWestvaco manages over 3 million acres of forestlands meeting stringent environmental standards and certified to Sustainable Forestry Initiative standards.

The ancestor of the Mead Paper Company started out in the paper business in 1846 but did not adopt the name Mead until 1882. Over the decades, Mead diversified into many different businesses and economic sectors, through purchases, mergers and joint ventures. It was first listed on the New York Stock Exchange in 1935. In 1966, Mead acquired Westab, which had already merged with the 1960 union of Montag Brothers Paper Company and Champion Paper. Westab's product line included the Big Chief tablet, Spiral Notebook brand and Hytone Notebooks.

In 1968, Mead entered the information technology sector by acquiring a small company called Data Corporation for $6 million, and renamed it Mead Data Central. Mead was originally interested in an inkjet printing system developed by Data. However, Data had also been working on a full-text information retrieval system for the U.S. Air Force, and by 1967 had adapted this product to the task of indexing and searching legal precedent as part of an experiment with the Ohio State Bar. After an Arthur D. Little study indicated that the information retrieval product had a promising future, Mead Data Central launched it as the LEXIS legal research system in 1973. In December 1994, Mead sold the LexisNexis system to Reed Elsevier for $1.5 billion.

The U.S. state of Illinois subsequently audited Mead's income tax returns and charged Mead an additional $4 million in income tax and penalties for the sale of LexisNexis; Mead paid the tax under protest, then sued for a refund in an Illinois state court. On April 15, 2008, the U.S. Supreme Court agreed with Mead that the Illinois courts had incorrectly applied the Court's precedents on whether Illinois could constitutionally apply its income tax to Mead, an out-of-state, Ohio-based corporation. The Court reversed and remanded so that the lower courts could apply the correct test and determine whether Mead and Lexis were a "unitary" business.

In 1986 Mead acquired Ampad makers of legal pads which it sold in 1992 to Bain Capital. In 2005, the Papers business unit—including both Mead and Westvaco paper mills—was sold to the investment firm Cerberus Capital Management for about $2.3 billion. The new company is called NewPage Corporation, which operated from Dayton, Ohio for a time until it outgrew its facilities. NewPage is currently headquartered in Miamisburg, Ohio.