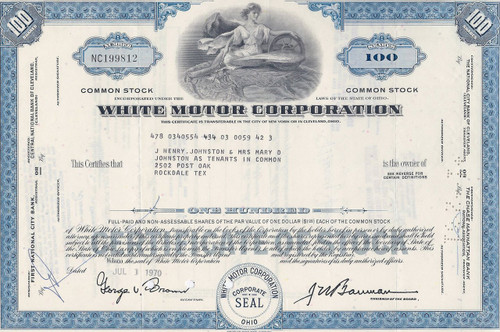 Very nice vignette of an allegorical female figure seated on a map of the United States and holding a winged wheel.  Incorporated in Ohio.

The White Motor Company was an American automobile and truck manufacturer from 1900 until 1980. The company also produced bicycles, roller skates, automatic lathes, and sewing machines. Before World War II, the company was based in Cleveland, Ohio.

About 1898, Thomas H. White purchased a Locomobile steam car and found its boiler unreliable. His son, Rollin, set out to improve its design. Rollin H. White patented his new design and offered it to, among others, Locomobile. Finally, he persuaded his father, founder of the White Sewing Machine Company, to allow the use of a corner in one of his buildings to build an automobile.

The first group of fifty cars were completed in October 1900, but none were offered to the public until April 1901 so the design could be thoroughly tested. It became necessary in 1905 to separate the automobile department from its parent company to accommodate the growth of the business and to physically separate them. On July 4, 1905, a racing steam car named "Whistling Billy" and driven by Webb Jay set a record of 73.75 mph on the Morris Park Racecourse.

A 1907 White steamer was one of the early vehicles in the White House when Theodore Roosevelt, the 26th President of the United States, allowed the Secret Service to use the car behind his horse-drawn carriage. In 1909, president William Howard Taft converted the White House stables into a garage and purchased four automobiles: two Pierce-Arrows, a Baker Electric, and a 1911 White.  The last steam car was built in January 1911 as the company made a transition to gasoline-powered vehicles. About 10,000 White steam-powered cars were built, more than the better known Stanley.

White Motor Company ended car production after WWI and began producing trucks. The company soon sold 10 percent of all trucks made in the US. White acquired several truck companies during this time: Sterling, Autocar, Diamond T, and REO. White produced trucks under the Autocar nameplate following its acquisition. Diamond T and REO Motor Car Company became the Diamond REO division, which was discontinued in the 1970s.

White designed and (with other companies) produced the M3 Scout Car, the standard United States Army reconnaissance vehicle at the start of World War II. White also built the later M2 and M3 half-tracks. White ranked 54th among US corporations in the value of WWII military production contracts. When husbands went to serve, wives took their jobs, and the work force totaled over 4000.

In 1953, White purchased the Autocar Company. From 1951 until 1977, White Motors also distributed Freightliner trucks. This took place under an agreement with Freightliner's parent, Consolidated Freightways. White manufactured trucks under its own brands—White, Autocar, and Western Star—as well, leading to the company becoming known as the "Big Four" through to the mid-1970s. The Sterling nameplate went to Freightliner after the companies' split; it was used from 1997 to 2008, by Daimler Trucks.

Sales dropped during the 1960s, and White tried merging with White Consolidated Industries, the company that once made sewing machines; the federal government blocked this deal. The company opened plants in Virginia and Utah but this did not help. Semon E. "Bunkie" Knudsen, former president of Ford Motor Company, made the company successful for a time, but the decline continued.

By 1980, White was insolvent. Volvo AB acquired the US assets of the company in 1981. Volvo produced trucks as White and Autocar through the 1980s, while Western Star continued independently in Canada and the United States, although Volvo-White produced high cab over engine models were purchased and rebadged Western Star for sale in the Canadian market through the early 1990s.

In 1988, Volvo and General Motors merged their heavy truck divisions in North America, creating Volvo GM Heavy Truck Corporation and a new brand of trucks, White-GMC. In 1995, Volvo purchased the stake of General Motors in their joint venture and rebadged White-GMC vehicles under the Volvo and Autocar nameplates. ocar remained a part of Volvo until 2000, when the trademark was withdrawn from the market.

A former White subsidiary, White Farm Equipment, produced farm tractors until 2001. As of 2006, the only products made under the White name is a series of corn planters (made by AGCO) and garden tractors (made by MTD Products).