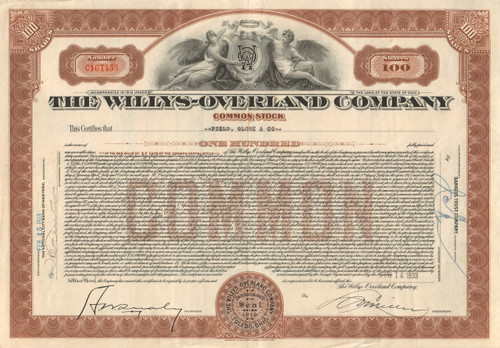 This rare stock cert is not often seen in the collectors market.  The larger format (9.5" x 13.5") makes it a great display piece.  Great vignette of angels flanking the company monogram logo.  Colors inlcude blue and brown.   Incorporated in Ohio. Issued and  cancelled. Dates in the 1930's.

To raise cash needed to pay off debts, many of the Willys Corporation assets were put on the auction block. The Elizabeth plant and the Chrysler Six prototype were sold to William C. Durant, then in the process of building a new, third empire. The plant built Durant's low-priced Star, while the Chrysler Six prototype was improved and modified, becoming the 1923 Flint.

In 1946, a year after the introduction of the CJ-2A, Willys produced the Willys "Jeep" Utility Wagon based on the same engine and transmission, with clear styling influence from the CJ-2A Jeep. The next year came a "Jeep" Utility Truck with four-wheel drive. In 1948, the wagon was available in four-wheel drive, making it the ancestor of all sport utility vehicles.