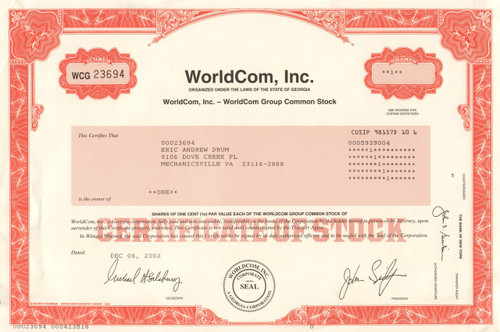 Rare piece of financial history and the accounting scandals.  Flat and unfolded.  Issued and not cancelled.  Folds from certificate mailing from broker. Printed signature of John Sidgmore as president.  Dated 2002. Tremendous gift for the investor, broker, or securities professional. Looks great when framed.

MCI, Inc. was an American telecommunication corporation, currently a subsidiary of Verizon Communications, with its main office in Ashburn, Virginia. The corporation was formed originally as a result of the merger of WorldCom and MCI Communications corporations, and used the name MCI WorldCom succeeded by WorldCom before changing its name to the present version on April 12, 2003, as part of the corporation's ending of its bankruptcy status. The company traded on NASDAQ as WCOM (pre-bankruptcy) and MCIP (post-bankruptcy). The corporation was purchased by Verizon Communications with the deal finalizing on January 6, 2006, and is now identified as that company's Verizon Enterprise Solutions division with the local residential divisions being integrated slowly into local Verizon subsidiaries.

For a time, WorldCom was the United States's second largest long distance telephone company (after AT&T). WorldCom grew largely by acquiring other telecommunications companies, most notably MCI Communications. It also owned the Tier 1 ISP UUNET, a major part of the internet backbone. It was headquartered in Clinton, Mississippi, before being relocated to Virginia.

The company began as Long Distance Discount Services, Inc. (LDDS) during 1983, based in Jackson, Mississippi. In 1985 LDDS selected Bernard Ebbers (born 1941) to be its CEO. The company became traded publicly as a corporation in 1989 as a result of a merger with Advantage Companies Inc. The company name was changed to LDDS WorldCom in 1995, and relocated to Clinton, Mississippi.

The company grew rapidly in the 1990s. Among the companies that were bought or merged with WorldCom were Advanced Communications Corp. (1992), Metromedia Communication Corp. (1993), Resurgens Communications Group (1993), IDB Communications Group, Inc (1994), Williams Technology Group, Inc. (1995), and MFS Communications Company (1996), and MCI in 1998.The acquisition of MFS included UUNET Technologies, Inc., which had been acquired by MFS shortly before the merger with WorldCom. In February 1998, WorldCom purchased online pioneer company CompuServe from its parent company H&R Block. WorldCom then retained the CompuServe Network Services Division, sold its online service to America Online, and received AOL's network division, ANS. The acquisition of Digex (DIGX) during June 2001 was also complex; Worldcom acquired Digex's corporate parent, Intermedia Communications, and then sold all of Intermedia's non-Digex assets to Allegiance Telecom.

On November 4, 1997, WorldCom and MCI Communications announced their US$37 billion merger to form MCI WorldCom, making it the largest corporate merger in U.S. history. On September 15, 1998, the new company, MCI WorldCom, opened for business, after MCI divested itself of its successful "internetMCI" business to gain approval from the U.S. Department of Justice.

On October 5, 1999, Sprint Corporation and MCI WorldCom announced a $129 billion merger agreement between the two companies. Had the deal been completed, it would have been the largest corporate merger in history. The merged company would have surpassed AT&T as the largest communications company in the United States. However, the deal floundered due to opposition from the U.S. Department of Justice and the European Union on concerns that it would create a monopoly. On July 13, 2000, the boards of directors of both companies terminated the merger. Later that year, MCI WorldCom renamed itself simply "WorldCom".

CEO Bernard Ebbers became very wealthy from the increasing price of his holdings in WorldCom common stock. However, in the year 2000 the telecommunications industry was in decline. WorldCom’s aggressive growth strategy suffered a serious setback when, in July 2000, it was forced by the U.S. Justice Department to abandon its proposed merger with Sprint. By that time, WorldCom’s stock price was decreasing, and banks were placing increasing demands on Ebbers to cover margin calls on his WorldCom stock that were used to finance his other businesses (timber and yachting, among others).

In 2001, Ebbers persuaded WorldCom’s board of directors to provide him corporate loans and guarantees in excess of $400 million to cover his margin calls. The board hoped that the loans would avert the need for Ebbers to sell substantial amounts of his WorldCom stock, as his doing so would result in a further decrease of the stock's price. However, this strategy failed. In April 2002, Ebbers resigned as CEO and was replaced by John Sidgmore, former CEO of UUNET Technologies Inc.

Beginning modestly during mid-1999 and continuing at an accelerated pace through May 2002, the company—directed by Ebbers (as CEO), Scott Sullivan (CFO), David Myers (Controller), and Buford "Buddy" Yates (Director of General Accounting)—used fraudulent accounting methods to disguise its decreasing earnings to maintain the price of WorldCom’s stock.

In 2002, a small team of internal auditors at WorldCom worked together, often at night and secretly, to investigate and reveal $3.8 billion worth of fraud. Soon thereafter, the company’s audit committee and board of directors were notified of the fraud and acted swiftly: Sullivan was dismissed, Myers resigned, Arthur Andersen withdrew its audit opinion for 2001, and the U.S. Securities and Exchange Commission (SEC) began an investigation into these matters on June 26, 2002. Sidgmore was instrumental in turning around the ailing company and in revealing Ebbers' fraud to regulators. Sidgmore died suddenly in December 2003 from acute pancreatitis.

By the end of 2003, it was estimated that the company's total assets had been inflated by about $11 billion. This made the WorldCom scandal the largest accounting fraud in American history until the exposure of Bernard Madoff's $64 billion Ponzi scheme in 2008.

On February 14, 2005, Verizon Communications agreed to acquire MCI for $7.6 billion.