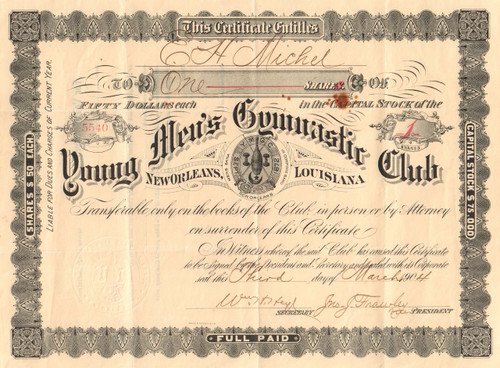 Very rare piece with the organization's logo as the center vignette. Unissued and not cancelled. Small ink stain above the company name. Dated 1904.

The Club was conceived in the youthful mind of J.G. Aleix, who, together with other young men, had seen the swanky Hammersley's gymnasium on St. Charles Street, decided to build a gym of their own in the back yard of the Aleix's home. They were enthusiastic young gymnasts eager to encourage among the young men who lived below Canal Street an opportunity to gain the many physical advantages which gymnastic exercises offered and master the technique of horizontal and parallel bars.

The two gymnastic apparatus were built by hand of oak and installed at the home of J.C. Aleix. From that, the 2nd day of September 1872, the Club continued to grow. J.C. Aleix became the first president. Dues were fixed at 50 cents monthly. A 35 cent assessment was levied for a bucket of water and dipper when the occasion demanded it.

The object was to develop the body by sufficient gymnastic exercise including fencing and boxing. The Club adopted as its motto, Mens Sana in Corpore Sano (a healthy mind will exist in a healthy body), and old gold and black the colors, which were used by the members in all gymnastic engagements. The winter months passed and the gymnasium remained in the back yard of Mr. Aleix's residence. Devoid of proper facilities and accommodations, especially in inclement weather, a committee formed May 21, 1873 to find a suitable home for the Club somewhere in the territory bounded by Poydras, St. Louis, Rampart and Magazine Streets. Arrangements commenced for an old building, floor covered with sawdust, at the comer of Rampart and Bienville Streets to become the Club's domicile. By September 5, 1873, every member had signed as security for the rent.

Edw. Fredericks, prominently connected in social and financial circles and eager to assist the new Club, succeeded J.C. Aleix as president in 1875 and the name of the club, by acclamation, was changed to the YOUNG MEN'S GYMNASTIC CLUB. With membership up to 350, the old building needed repairs and by 1884 the landlord advanced the rent from $10 to $40 monthly, required a five-year lease, and demanded any and all repairs to be made by the Club. This did not meet with member approval. Hence, arrangements to purchase the property 37-39-41 Burgundy Street for $6,000 cash were finalized in February 1885.

The Club was holding its own in 1886-87, but with a bit of difficulty. The president called a meeting September 11, 1888 to inaugurate a Stock Corporation with 1500 shares at $50 per share, payable 10% down and 10% every 60 days. The applicant for membership was required to hold a share of stock. As well, stock was made liable for all dues or other indebtedness due by a member. Some members protested, pleading their impecuniousness. The question was opened for debate and after a lively wrangle, a concession was made for the sake of harmony and the success of the Club.

Within two years the membership had grown to fifty, activities were transferred from the backyard of the president’s home to an old stable in the French Quarter, and they became the Young Men’s Gymnastic Club (YMGC). In the 1890s they built a large gymnasium and other athletic facilities, and in 1929 the club completed construction of its present building on Rampart Street and adopted the name New Orleans Athletic Club (NOAC).