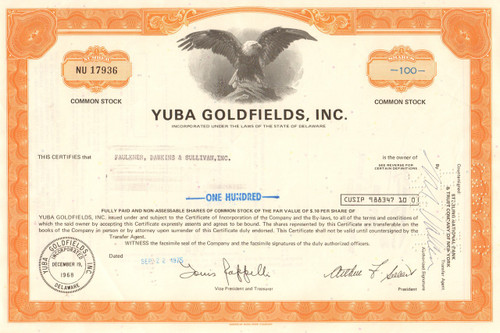 Incorporated 1968 as Yuba Industries, the company changed its name to Yuba Goldfields in 1974. The company engaged in the mining and processing of aggregate used for cement processing in Yuba  City area of California (Sutter County, North of Sacramento).  In 1979, the company entered a partnership with Placer Service Corp for future gold dredging  near Marysville CA.

In 1981, Yuba Natural Resources Inc. announced that its shareholders had approved changing the name of the company from Yuba Goldfields Inc. to Yuba Natural Resources. In 1989, Richard T. Silberman, the chairman and chief executive of Yuba, was arrested in a money-laundering case that rocked the Golden State. In the backwash, the subsidiary was spun off to Yuba shareholders, under the less mellifluous name of YG Development Corporation.

The first Yuba-area miners panned for gold in stream beds in the valley but within a decade large-scale industrial processes replaced solitary prospectors. Mining companies moved from the valley floor into the Sierra Nevada foothills, where miners blasted gravel hillsides with high-pressure jets of water—a process called hydraulic mining. After the miners extracted gold in long wooden sluices, they dumped the gravel back into the mountain valleys. The mine waste carried by the Yuba River ended up raising the riverbed, causing floods that buried farms. As the Yuba River is a tributary of the Sacramento River, much of that debris then found its way to the San Francisco Bay. In Sacramento, the I Street Bridge had to be raised twenty feet. Lawsuits by farmers curtailed hydraulic mining in 1883, but the gravel remained behind in the Yuba Goldfields.

In 1893, the California Debris Commission began to dredge the Yuba near Marysville to mitigate the environmental damage, and piled the gravel along the river's banks, creating the irregular hills seen today. The dredgers also created over 200 ponds, which are fed by a network of underground rivers, which in turn were formed due to the porosity of the ground. The water in these ponds is usually clear blue, the impurities having been filtered by the gravel.

In the twentieth century, a series of mining companies reprocessed the slickens, extracting gold that was increasingly difficult to separate from the gravel. Even though the ore had already been processed, it was the principal source of gold in California for some time. By the 1970s, it was economically impossible to retrieve any more gold, and the debris became a source of aggregate, an essential ingredient of concrete. It has been estimated that up to $15 billion worth of aggregate lies within the goldfields.