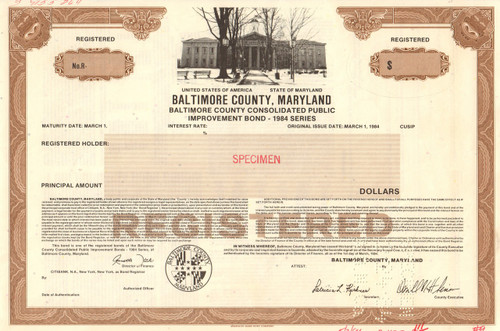 The earliest known record of Baltimore County in the Maryland State Archives (Annapolis) is January 12, 1659, when a writ was issued on behalf of the General Assembly of Maryland to its sheriff and is considered by historians to be its official year of founding  among the now twenty-three counties of the State, as it assumes that a certain amount of organization and appointments in the middle 17th Century had already occurred. Previously, Old Baltimore County was more known as a geographical entity than a political one, with its territorial limits consisting of most of northeastern Maryland, then the northwestern frontier of the Province and included the present day jurisdictions of Baltimore City, Cecil, and Harford Counties, as well as parts of Carroll, Anne Arundel, Frederick, Howard, and Kent Counties. In 1674, a proclamation of the Proprietor, established the then extensive boundary lines for old Baltimore County.

The separation of Baltimore County from Baltimore City which it surrounds on three sides (east, north and west) occurred on July 4, 1851, as a result of the adoption of the 1851 second state constitution.  Towsontown was voted in a referendum by the voting citizens as the new "county seat" several years later on February 13, 1854. A new Baltimore County Courthouse was authorized to be built facing Washington Avenue, between Chesapeake and Pennsylvania Avenues to replace the previous courthouse and governmental offices.

According to the U.S. Census Bureau, the county has a total area of 682 square miles, of which 598 square miles is land and 83 square miles is water. It is the third-largest county in Maryland by land area. The lowest elevation is sea level along the shoreline of the Chesapeake Bay. Much of Baltimore County is suburban in character, straddling the border between the Piedmont plateau to the northwest and, in the southern and southeastern regions of the county bordering the Patapsco River and the Chesapeake Bay, the Atlantic coastal plain. Northern Baltimore County is primarily rural, with a landscape of rolling hills and deciduous forests characteristic of the Southeastern mixed forests and shares the geography with its neighbors to the east and west, Carroll County and Harford County, and going north across the historic Mason–Dixon line into Adams County and York County in south central Pennsylvania.