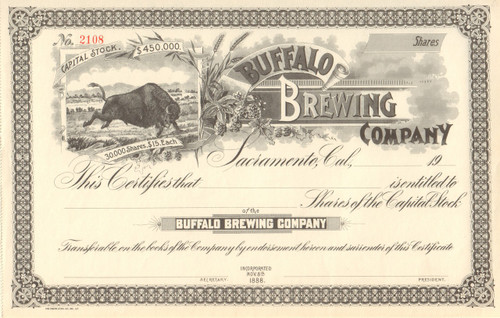 Amazing graphic of a charging buffalo as the left side vignette.  Difficult brewing piece to find. unissued but circa 1900 from issued examples..

Incorporated in 1888 and brewing by 1890, the Buffalo Brewing Company was started by Herman Grau in Sacramento based on the successful breweries of Buffalo, New York. An ambitious brewery from the beginning, Buffalo became among the largest beer operations west of the Mississippi, with distribution throughout California, Nevada, Hawaii, parts of Asia and Central America.

Prohibition reduced Buffalo to producing ice and near beer, but it quickly resumed beer production after repeal. The brewery ceased operation in 1945 after national breweries locked up distribution channels and choked regional and local breweries into extinction. However, in the 1970’s, two enterprising law school graduates re-launched the Buffalo label in Sacramento. After a promising start and apparent success, the upstart operation folded only a few year later and the Buffalo has not roamed in Sacramento ever since.