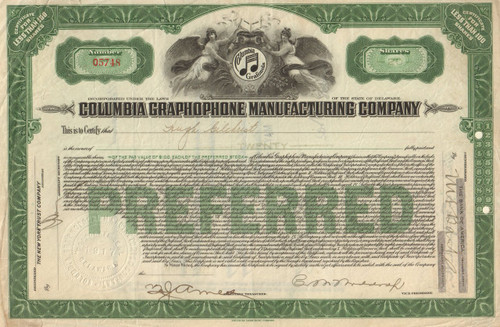 The Columbia Graphophone Company was one of the earliest gramophone companies in the United Kingdom. Under EMI, as Columbia Records, it became a successful label in the 1950s and 1960s. It was eventually replaced by the newly created EMI Records as part of an EMI label consolidation. It has since been absorbed by the Parlophone Records unit of Warner Music Group. The Manufacturing subsidiary was formed to as a holding corporation of its factories in Baltimore, Bridgeport,  and Toronto.

The Columbia Phonograph Company was founded by stenographer, lawyer and New Jersey native Edward Easton (1856–1915) and a group of investors. It derived its name from the District of Columbia, where it was headquartered. At first it had a local monopoly on sales and service of Edison phonographs and phonograph cylinders in Washington, D.C., Maryland and Delaware. As was the custom of some of the regional phonograph companies, Columbia produced many commercial cylinder recordings of its own, and its catalogue of musical records in 1891 was 10 pages. Columbia's ties to Edison and the North American Phonograph Company were severed in 1894 with the North American Phonograph Company's breakup. Thereafter it sold only records and phonographs of its own manufacture.

In July 1912, Columbia decided to concentrate exclusively on disc records and stopped manufacturing cylinder phonographs although they continued selling Indestructible's cylinders under the Columbia name for a year or two more. Columbia was split into two companies, one to make records and one to make players. Columbia Phonograph was moved to Connecticut, and Ed Easton went with it. Eventually it was renamed the Dictaphone Corporation.

In late 1923, Columbia went into receivership. The company was bought by its English subsidiary, the Columbia Graphophone Company in 1925 and the label, record numbering system, and recording process changed. (The "New Process" was used on budget labels until 1930). See more at American Columbia single record cataloging systems. On February 25, 1925, Columbia began recording with the new electric recording process licensed from Western Electric. The new "Viva-tonal" records set a benchmark in tone and clarity unequaled on commercial discs during the "78-rpm" era. The first electrical recordings were made by Art Gillham, the popular "Whispering Pianist". In a secret agreement with Victor, neither company made the new recording technology public knowledge for some months, in order not to hurt sales of their existing acoustically recorded catalog while a new electrically recorded catalog was being compiled.

The Columbia Graphaphone Company was one of the three major companies in the early days of recording, sharing the scene with The Edison Phonograph Company and the Victor Talking Machine Company. While Columbia proved to be very active in the recording scene and remained for very years a successful company, they were not able to get out of the shadow of Edison in the early years. The company merged into Electric & Musical Industries Ltd known as EMI in 1931.