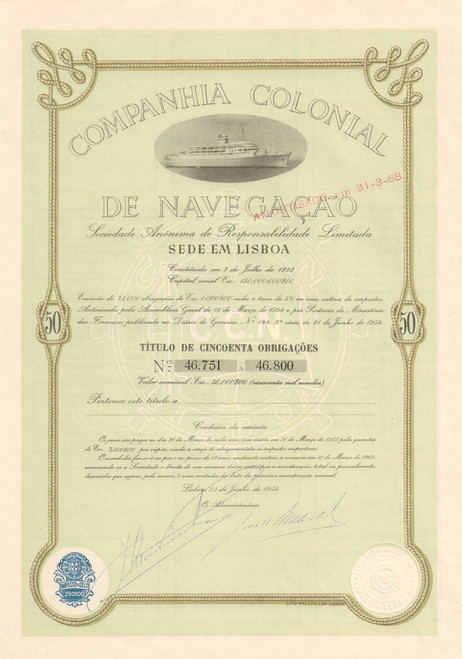 Fantastic maritime collectible. Great photo vignette of one of the company's ocean liners, Vera Cruz. Issued and cancelled. Dated 1954 in the text.

The Companhia Colonial de Navegação (CCN) (literally "Colonial Navigation Company") was a Portuguese shipping company that was founded in 1922 and merged into another company in 1974. Its ships carried freight as well as passengers. It was perhaps best known during the Second World War, when its ships, flying the neutral Portuguese flag, were some of the few to provide transatlantic service. The company was founded in Angola on 3 July 1922 to serve Portugal's overseas colonies, particularly those in Portuguese Africa. It started service with two ships, the Guiné I and Ganda I, serving destinations in Angola, the Cape Verde Islands, and Guinea Bissau.

During the Second World War, the company expanded to take advantage of its status as one of the few shipping companies based in a neutral nation in a position to provide service between ports in the Western Hemisphere and Europe. It acquired ships to meet the new demand and used in voyages between Portugal, the United States, and Brazil. Each of the company's ships had its name and PORTUGAL written in very large letters on their sides, as well as a prominent Portuguese flag. Even so, two of the company's ships were torpedoed and sunk during the conflict. The Serpa Pinto was stopped and boarded in 1944 in the mid-Atlantic by the German submarine U-541, but the ship was ultimately allowed to proceed after the German naval authorities declined to approve its sinking.

After the war, the company again concentrated mostly on serving Portugal and its colonies. In 1961, one of its ships, the Santa Maria, was hijacked to Brazil by forces opposed to Portugal's government. When demand for passenger service declined it converted some of its ships into cruise ships. Finally in 1974 it was combined with the Empresa Insulana de Navegação (EIN) to form the Companhia Portuguesa de Transportes Marítimos (CPTM). That company stopped operating about 1985.