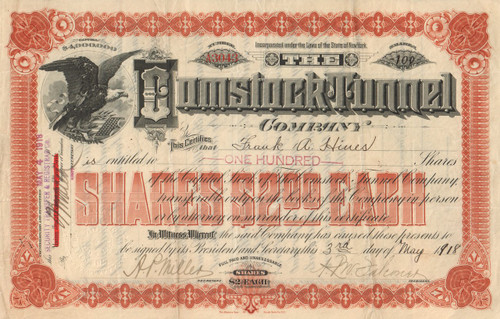 The Comstock Tunnel Company was incorporated on August 31, 1889, under the laws of the State of New York.  The company was the reorganization name for the famous Sutro Tunnel. The Sutro Tunnel is a drainage tunnel connected to the Comstock Lode in Northern Nevada. It begins at Virginia City and empties approximately 6 miles southeast near the town of Dayton.

The tunnel was first envisioned by Adolph Sutro in 1860. He promoted the drainage tunnel in order to allow access to deeper mineral exploration in the Comstock. Mine flooding and inadequate pumps had inhibited some exploration activities up to that time. By 1865, Sutro's idea had gained the approval of state and federal legislation.  Sutro formed the Sutro Tunnel Company, selling stock certificates to raise funds for its construction, which began in 1869. Financing also came from local miners under the guise of improved mine safety. This was further advocated by Sutro after the Yellow Jacket mine disaster where dozens of miners were burned to death because they could not escape the mine.

The main tunnel was completed in 1878. By that time, however, the Comstock mine had gone deeper, using newer improved pumps, and was also thinning out. Upon completion, Adolph Sutro immediately sold his interest in the tunnel company and moved to San Francisco, later becoming mayor of that city.