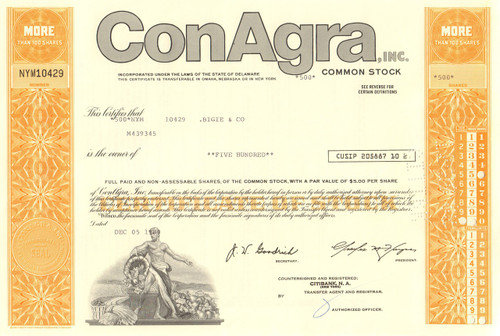 Nice food piece with a vignette of a classical male figure holding a cornucopia in front of farm scenes.  Issued and cancelled, Dated in the 1980's. Owner of many famous food brands.

ConAgra Foods, Inc. (CAG) is an American packaged foods company headquartered in Omaha, Nebraska. ConAgra makes and sells products under various brand names that are available in supermarkets, as well as restaurants and food service establishments.

ConAgra was founded in 1919 by Frank Little and Alva Kinney, who brought together four grain mills as Nebraska Consolidated Mills (NCM). Initially headquartered in Grand Island, Nebraska, it moved to Omaha in 1922. The company ran at a profit until 1936, when Kinney retired. In 1940, the company began producing flour at its own mill, and in 1942 ventured into the livestock feed business. That year president R.S. Dickinson opened the company's first out-of-state facility in Alabama with a flour mill and animal feed plant.

After researching new uses for their flour, NCM funded the establishment of the Duncan Hines brand of cake mixes in 1951 as a way to market more flour. This venture was very successful, leading the company to its current place as the third largest flour miller in the U.S. However, this did not lead NCM to consider other food ventures, and instead they sold their assets in Duncan Hines to Procter & Gamble in 1956. As American households purchased more and more prepared and instant foods in the 1950s and 1960s, NCM chose not to expand into the businesses that used their flour, instead turning in the opposite direction and focusing more on raw foods like poultry and expanding its livestock feed business.

In 1971, Nebraska Consolidated Mills changed its name to ConAgra, a portmanteau of con for consolidated and agra, similarly short in English for agriculture. The 1970s brought the company to the brink of ruin as it lost money expanding into the fertilizer, catfish, and pet product industries and as commodity speculation wiped out ConAgra's margins on raw foods. In 1974, C. Michael "Mike" Harper, an experienced food industry executive, took over the firm and brought it back from the brink of bankruptcy. Nonetheless, ConAgra's business model left it at the mercy of volatile commodity prices. In response, the company set off on a two-decade-long buying spree, purchasing over one hundred prepared food brands, starting with its 1980 purchase of Banquet Foods. It moved heavily into the frozen food business and the packaged meat industry, and then picked up a selection of other brands from firms like RJR Nabisco and Beatrice Foods among others, as the leveraged buyouts of the 1980s resulted in the divestiture or breakup of many major American consumer product firms. In 1993 alone it purchased $500 million in smaller firms, and in 1998 it purchased another $480 million in brands from Nabisco.

On November 27, 2012 ConAgra officials announced they were purchasing Ralcorp, pending Ralcorp shareholder approval, for approximately $4.95 billion. Stockholders of Ralcorp Holdings Inc. would receive $90 per share. The deal is expected to be finished by the end of March 2013. When done, it will make ConAgra the largest private-label packaged food business in the United States.

On July 14, 2014, ConAgra announced that it has acquired TaiMei Potato Industry Limited, a potato processor in Shangdu, Inner Mongolia. This acquisition expands ConAgra Foods’ Lamb Weston operations in a market that has growing demand for frozen potato products.