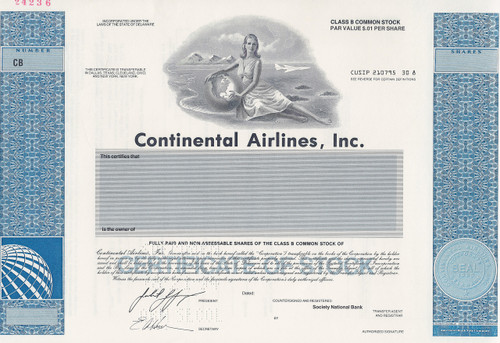 Rare printer sample cert with a great vignette of a modern female figure holding a globe with a background of mountains and a jet aircraft over islands. Circa 2010 from issued examples.

Continental Airlines was a major U.S. airline, founded in 1934 and eventually headquartered in Houston, Texas. In May 2010, the airline announced that it would merge with UAL Corporation, the parent company of United Airlines, via a stock swap. Continental's shares were acquired by UAL Corporation. The acquisition was completed in October 2010, at which time the holding company was renamed United Continental Holdings. During the integration period, each airline ran a separate operation under the direction of a combined leadership team, based in Chicago, Illinois. The integration was completed on March 3, 2012.

Varney Speed Lines (named after one of its initial owners, Walter T. Varney, who was also a founder of United Airlines) was formed in 1934, operating airmail and passenger services in the American Southwest. The airline commenced operations with the Lockheed Vega, a single-engine plane that carried four passengers. Following cancellation of all domestic airmail contracts by the Roosevelt administration in 1934, Robert F. Six bought into the airline and became general manager on July 5, 1936. Varney was awarded a 17-cent-rate airmail contract between Pueblo and El Paso; it carried passengers as a sideline. The carrier was renamed Continental Air Lines (later changed to "Airlines") on July 8, 1937. Six relocated the airline's headquarters to Denver Union (later Stapleton) Airport in Denver in October 1937. Six changed the name to "Continental" because he wanted the airline name to reflect his desire to have the airline fly all directions throughout the United States.

In 1955 Continental merged with Pioneer Airlines, gaining access to 16 more cities in Texas and New Mexico. Pioneer's Executive Vice President Harding Luther Lawrence arrived at Continental as a result of the merger. Bob Six commented on more than one occasion that, "the reason we bought Pioneer was to get Harding." Harding Lawrence implemented a number of innovative changes at Continental as well as a flamboyant advertising campaign during his ten years as Mr. Six's protege. During Lawrence's tenure Continental grew by a phenomenal 500 percent." Lawrence left Continental in April 1965 to head Braniff Airways where he implemented dramatic changes that resulted in monumental growth for the Dallas based carrier.

During the late 1950s and early 1960s Six was the airline industry's leading lower-fare advocate. He predicted that increased traffic, not higher fares, was the answer to the airline industry's problems. To amazement from the industry he introduced the economy fare on the Chicago-Los Angeles route in 1962. He later pioneered a number of other low or discount fares which made air travel available to many who could not previously have afforded it.

In 1981 Texas Air Corporation, an airline holding company controlled by U.S. aviation entrepreneur Frank Lorenzo, acquired Continental after a contentious battle with Continental's management who were determined to resist Lorenzo. Continental's labor unions also fiercely resisted, fearing what they termed as "Lorenzo's deregulation tactics", which they believed implied that he wanted to make Continental a non-union airline. Lorenzo viewed the company as stuck in the pre-deregulation era and in need of serious changes to stay competitive. Continental was experiencing financial challenges both before and after Lorenzo's takeover, and he demanded immediate wage cuts and layoffs to keep the company afloat.

n 1990, Frank Lorenzo was forced to retire after 18 tumultuous years at the helm of Texas International and later Texas Air and Continental Airlines, selling the majority of his Jet Capital Corporation to Scandinavian Airlines System (SAS). On December 3, 1990, Continental filed for its second bankruptcy, due to Lorenzo dedicating himself almost full-time to Eastern Air Lines acquisition and labor relations issues, the 1990 Gulf War had prompted a dramatic increase in the price of jet fuel, and People Express had been highly leveraged at the time of its merger with Continental, having purchased Frontier Airlines just two years before.

In February 2008, UAL Corporation and Continental Airlines began advanced stages of merger talks and were expected to announce their decision in the immediate aftermath of a definitive merger agreement between rival Delta Air Lines and Northwest Airlines.  On April 27, 2008, Continental broke off merger negotiations with United and stated it was going to stand alone. Despite ending merger talks, Continental announced that it will join United in the Star Alliance.

United and US Airways were in advanced merger talks in late April 2008, following the announcement that Continental had broken off talks with United. In June 2008, CEOs of both United Airlines and Continental Airlines signed an alliance pact that led to their eventual merger.  On May 2, 2010, the Boards of Directors at Continental and United Airlines approved a stock-swap deal that would combine them into the world's largest airline in revenue passenger miles. The new airline will take on United Airlines name, Continental's logo and be based in United's hometown of Chicago. Both airlines had been reporting losses in the recession and expected the merger to generate savings of more than $1 billion a year.