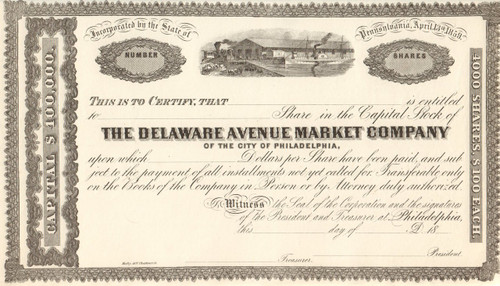 Nice older stock with a great vignette of a steam paddle wheeler at the dock and warehouse with train and workers to the left.  Unissued and not cancelled. Circa 1860 from company records . Dated 18__.

Incorporated 1859. The business was located at the NW corner of Spruce Street and South Delaware Avenue, the building acted as a bourse for incoming goods to Philadelphia merchants. It was located directly across the tracks from the Delaware River and the docks (Municipal Pier and the Penn RR company freight station). The company owned and leased a number of docks, warehouses, and other buildings on the waterfront. Today, the area is better known as the Spruce Street Harbor Park area.

As it developed during the nineteenth and early twentieth centuries, Delaware Avenue became the main transportation corridor for the shipping and handling of food and general cargo for all of Philadelphia. Early photographs show hordes of horse-drawn wagons jamming the street, most loaded with perishable goods. Dock Street near Delaware Avenue was the city’s primary food distribution center for more than a century.