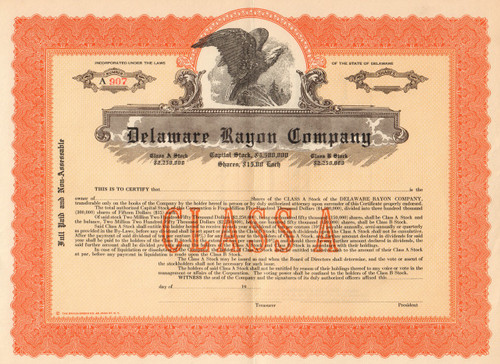 Colorful piece with a nice eagle vignette - perched on a rock with wings spread, trees in the background.  Nice patterned under print within the orange borders. Unissued and not cancelled. Dated 19__ but circa 1926 from company records.

Incorporated 1926, the company quickly became one of the nation's largest rayon producers along with Du Pont, Celanese, and the Viscose Company. The company had a patent (1933) for a spinnerette apparatus that helped separate strands during extrusion.  The process is still used to this day in plastics extrusion manufacturing. The company was dissolved in 1954.

Rayon is a manufactured regenerated cellulose fiber. It is made from purified cellulose, primarily from wood pulp, which is chemically converted into a soluble compound. It is then dissolved and forced through a spinneret to produce filaments which are chemically solidified, resulting in synthetic fibers of nearly pure cellulose. Because rayon is manufactured from naturally occurring polymers, it is considered a semi-synthetic fiber. Specific types of rayon include viscose, modal and lyocell, each of which differs in manufacturing process and properties of the finished product.

Rayon is a versatile fiber and is widely claimed to have the same comfort properties as natural fibers, although the drape and slipperiness of rayon textiles are often more like nylon. It can imitate the feel and texture of silk, wool, cotton and linen. The fibers are easily dyed in a wide range of colors. Rayon fabrics are soft, smooth, cool, comfortable, and highly absorbent, but they do not insulate body heat, making them ideal for use in hot and humid climates, although also making their "hand" (feel) cool and sometimes almost slimy to the touch. The durability and appearance retention of regular viscose rayon are low, especially when wet; also, rayon has the lowest elastic recovery of any fiber. However, HWM rayon (high-wet-modulus rayon) is much stronger and exhibits higher durability and appearance retention. Recommended care for regular viscose rayon is dry-cleaning only. HWM rayon can be machine washed.

Rayon contributed partly to the decline of the US textile industry in the 1920s. It was far cheaper to produce than wool, cotton or silk. It also required less processing and hence fewer workers. In addition, it was 50% cheaper than silk during the 1920s in the US. Then, it was used initially for men's socks but later for lingerie and women's stockings.