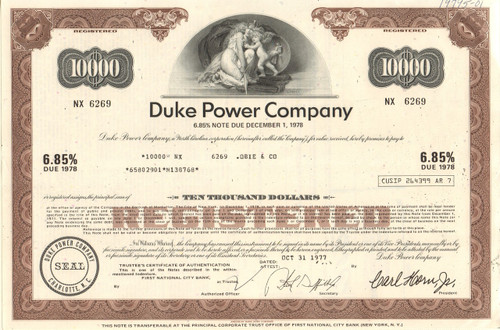 Wonderful stock-sized bond with a vignette of a classical female warrior figure holding a sword and protecting a small child with her shield.  Issued and cancelled. Dated 1970's.

The company began in 1900 as the Catawba Power Company when Dr. Walker Gill Wylie and his brother financed the building of a hydroelectric power station at India Hook Shoals along the Catawba River near India Hook, South Carolina. In need of additional funding to further his ambitious plan for construction of a series of hydroelectric power plants, Wylie convinced James Buchanan Duke to invest in the Southern Power Company, founded in 1905.

A 1973 labor dispute between mine workers and Duke Energy was the subject of the documentary Harlan County, USA. The film documents the use of "gun thugs" to intimidate striking workers.

In 1988, Nantahala Power & Light Co., which served southwestern North Carolina, was purchased by Duke and is now operated under the Duke Power Nantahala Area brand. Duke Power merged with PanEnergy, a natural gas company, in 1997 to form Duke Energy.[8] The Duke Power name continued as the electric utility business of Duke Energy until the Cinergy merger.

With the purchase of Cinergy Corporation announced in 2005 and completed on April 3, 2006, Duke Energy Corporation's customer base grew to include the Midwestern United States as well. The company operates nuclear power plants, coal-fired plants, conventional hydroelectric plants, natural-gas turbines to handle peak demand, and pumped hydro storage. During 2006, Duke Energy also acquired Chatham, Ontario-based Union Gas, which is regulated under the Ontario Energy Board Act (1998).

On January 3, 2007, Duke Energy spun off its gas business to form Spectra Energy. Duke Energy shareholders received 1 share of Spectra Energy for each 2 shares of Duke Energy. After the spin-off, Duke Energy now receives the majority of its revenue from its electric operations in portions of North Carolina, South Carolina, Kentucky, Ohio, and Indiana. The spinoff to Spectra also included Union Gas, which Duke Energy acquired the previous year.

On July 3, 2012, Duke Energy merged with Progress Energy Inc with the Duke Energy name being retained along with the Charlotte, North Carolina headquarters. Duke announced on June 18, 2013 that CEO Jim Rogers was retiring and Lynn Good would become the new CEO. Rogers has been CEO and Chairman since 2006, while Good was Chief Financial Officer of Duke since 2009, having joined Duke in the 2006 Cinergy merger. Roger's retirement was part of an agreement to end an investigation into Duke's Progress Energy acquisition in 2012.