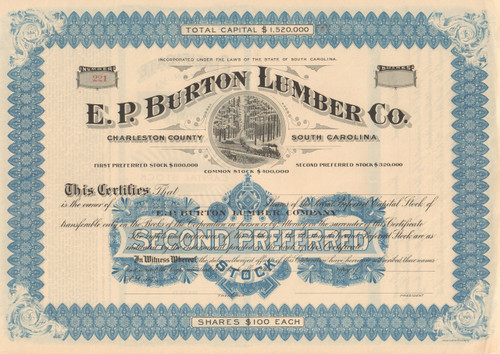 Incredible stock collectible. Elaborate printing throughout with a vignette of a steam train travelling through a forest of pine trees. Unissued and not cancelled. Large format at 10.5" by 15". Circa 1913 from text on reverse.

Based in Charleston County SC, E.P. Burton Lumber Company was incorporated under the laws of South Carolina on December 1, 1904, and that its charter was amended in 1913 by increasing the authorized amount of its capital stock and providing for the issuance of preferred stock.

During the period from May 15, 1914, through November 15, 1919, regular dividend payments were made without formal declarations by the Board of Directors. In 1923 the Company's lumber mill was destroyed by fire, and it was decided to liquidate the Company. The major portion of its assets was sold in 1924, and by June 21st of that year all creditors of the Company had been paid. Payments to the stockholders during the remainder of 1924 and 1925 had the effect of retiring in toto all principal due on the first preferred stock with an excess of $14 per share.

The Company was dissolved in 1927, and from that time through 1940, the Trustees in Liquidation filed corporation income tax returns which showed no taxable income. In 1941, the Trustees sold a part of the mill site for $30,000 and, in 1942, the remainder was sold for $75,000. This was the Company's last remaining asset. Out of these proceeds the Trustees paid the first preferred stockholders a total of $9.53 per share, and recorded it on the backs of the certificates as "partial liquidation of interest due on claim of former First Preferred Stockholders."