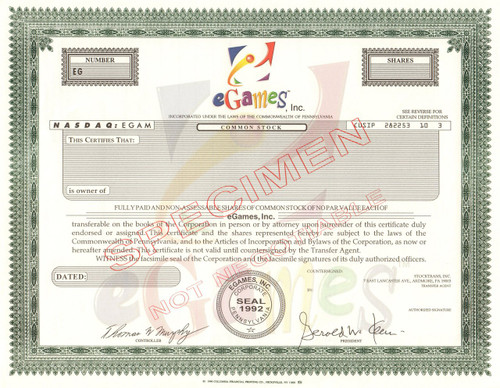 eGames, Inc. was a software publisher and developer for casual and traditional computer games based in Langhorne, PA. EG was originally called E-games when it went public in 1996. The public company was formed by a merger between a software sales company (Romtech) and one of the first educational multi-media CD-ROM development companies called Applied Optical Media based in West Chester, PA. Soon after going public, Romtech acquired a software development company based in San Luis Obispo, CA that created SOHO software, and also shut down operations at Applied Optical Media.

The eGames website provides registration and technical support. In late 2005, eGames acquired Cinemaware, a game company founded in the eighties who produced a series of "interactive movie" games including widely acclaimed Defender of the Crown. In 2006, eGames released the first titles under its new affiliated label, Cinemaware Marquee. Through Cinemaware Marquee, eGames brings traditional games developed around the world to retail. Cinemaware Marquee titles include Space Rangers 2: Rise of the Dominators, Independent Game Festival grand prize winner Darwinia, and Moscow to Berlin: Red Siege. eGames recently announced that it would be reviving many of the classic Cinemaware titles, beginning with Defender of the Crown.

With the September 2005 release of Boss Hunter: Revenge is Sweet!, an office-themed arcade-style game where the player chases their boss with a wide variety of work-related weaponry and early 2007 launch of Defender of the Crown: Heroes Live Forever, eGames began in-house game development efforts working primarily with Brazil-based TechFront Studios, Ltd. eGames' third internally developed title, Burger Island launched in May 2007 in conjunction with Sandlot Games. It was distributed by Yahoo! Games for a two-week period, and was the number one downloadable game in terms of sales and downloads on Yahoo! in its debut week.

eGames became known as Entertainment Games, following the acquisition of Heyday Games in June 2011. Following this, the company focused its efforts on creating a Facebook game known as Retro World, followed by an unsuccessful Kickstarter campaign called Global Race Club. Entertainment Games, Inc. ceased trading as an entertainment company in April, 2012 due to financial difficulties. The company name, ticker symbol EGAM, and public company structure were acquired by a mining company, Tamino Minerals, in a reverse merger.