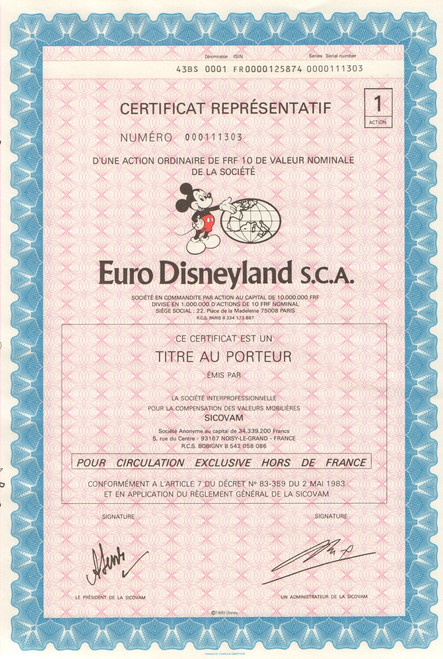 Great vignette on this collectible certificate of Mickey Mouse next to a map of Europe. Issued and cancelled.  Dated 1989 from copyright in certificate printing.

Disneyland Paris, originally Euro Disney Resort, is an entertainment resort in Marne-la-Vallée, a new town located east of the centre of Paris, and is the most visited theme park in all of France and Europe. It is owned and operated by Euro Disney S.C.A., a publicly traded company in which The Walt Disney Company owns a minority stake. The resort covers 4,800 acres and encompasses two theme parks, several resort hotels, a shopping, dining, and entertainment complex, and a golf course, in addition to several additional recreational and entertainment venues. Disneyland Park is the original theme park of the complex, opening with the resort on 12 April 1992. A second theme park, Walt Disney Studios Park opened in 2002. The park is the second busiest Disney park by number of visitors with 15.6 million visitors in 2013 placing it in between Disneyland Anaheim in California, USA, and Walt Disney World in Florida, USA.

The resort is the second Disney park to open outside the United States, following Tokyo Disney Resort, and the first to be owned and operated by Disney (through Euro Disney S.C.A.). The resort was designed specifically to follow the model established by Walt Disney World in Florida.

Following the success of Walt Disney World in Florida, plans to build a similar theme park in Europe emerged in 1972. Under the leadership of E. Cardon Walker, Tokyo Disneyland opened in 1983 in Japan with instant success, forming a catalyst for international expansion. In late 1984 the heads of Disney's theme park division, Dick Nunis and Jim Cora, presented a list of approximately 1,200 possible European locations for the park. By March 1985, the number of possible locations for the park had been reduced to four; two in France and two in Spain.

Both Spanish sites were located near the Mediterranean Sea and offered a subtropical climate similar to Disney's parks in California and Florida. Disney had also shown interest in a site near Toulon in southern France, not far from Marseille. The pleasing landscape of that region, as well as its climate, made the location a top competitor for what would be called Euro Disneyland. However, shallow bedrock was encountered beneath the site, which would have rendered construction too difficult. Finally, a site in the rural town of Marne-la-Vallée was chosen because of its proximity to Paris and its central location in Western Europe. This location was estimated to be no more than a four-hour drive for 68 million people and no more than a two-hour flight for a further 300 million.

Michael Eisner, Disney's CEO at the time, signed the first letter of agreement with the French government for the (4,940-acre) site on 18 December 1985, and the first financial contracts were drawn up during the following spring. The final contract was signed by the leaders of the Walt Disney Company and the French government and territorial collectivities on 24 March 1987. Construction began in August 1988, and in December 1990, an information centre named "Espace Euro Disney" was opened to show the public what was being constructed. Plans for a theme park next to Euro Disneyland based on the entertainment industry, Disney-MGM Studios Europe, quickly went into development, scheduled to open in 1996 with a construction budget of US$2.3 billion

Euro Disney opened for employee preview and testing in March 1992. During this time visitors were mostly park employees and their family members, who tested facilities and operations. The press were able to visit the day before the park’s opening day on 12 April.

On 12 April 1992, Euro Disney Resort and its theme park, Euro Disneyland, officially opened. Visitors were warned of chaos on the roads. A government survey indicated that half a million people carried by 90,000 cars might attempt to enter the complex. French radio warned traffic to avoid the area. By midday, the car park was approximately half full, suggesting an attendance level below 25,000. Explanations of the lower-than-expected turnout included speculation that people heeded the advice to stay away and that the one-day strike that cut the direct RER railway connection to Euro Disney from the centre of Paris made the park inaccessible.

In 1994 the company was still having financial difficulties. There were rumors that Euro Disney was getting close to having to declare bankruptcy. The banks and the backers had meetings to work out some of the problems involving the financial problems facing Euro Disney. It was in March 1994 that Team Disney went into negotiations with the banks so that they could get some help for their debt. As a last resort, the Walt Disney Company threatened to close the Disneyland Paris park, leaving the banks with the land.

The Euro Disney Company stock price spiraled downwards and on 23 July 1992, Euro Disney announced an expected net loss in its first year of operation of approximately 300 million French francs. During Euro Disney's first winter, hotel occupancy was so low that it was decided to close the Newport Bay Club hotel during the season. On 31 May 1995, a new attraction opened at the theme park. Space Mountain: De la Terre à la Lune had been planned since the inception of Euro Disneyland under the name Discovery Mountain, but was reserved for a revival of public interest. With a redesign of the attraction (which had premiered as Space Mountain at the Walt Disney World Resort's Magic Kingdom in 1975) including a "cannon launch" system, inversions, and an on-ride soundtrack, the US$100 million attraction was dedicated in a ceremony attended by celebrities such as Elton John, Claudia Schiffer and Buzz Aldrin.

On 25 July 1995, Euro Disney S.C.A. reported its first ever quarterly profit of US$35.3 million. On 15 November 1995, the results for the fiscal year ending 30 September 1995, were released; in one year the theme park's attendance had climbed from 8.8 million to 10.7 million – an increase of 21%.  As of 2002, Disneyland Paris underwent a name change to Disneyland Resort Paris. In 2002, Euro Disney S.C.A. and The Walt Disney Company announced another annual profit for Disneyland Paris. However, it then incurred a net loss in the three years following. On December 1, 2003, Euro Disney S.C.A launched a new marketing plan to bring new, first-time European visitors to the Resort.

By March 2004, The Walt Disney Company had agreed to write off all debt that Euro Disney S.C.A. owed to The Walt Disney Company.[20] This same year, having been open fewer than fifteen years, Disneyland Paris had become the number one tourist destination for Europe, outselling the Louvre and the Eiffel Tower.

Disneyland Paris and its assets have been subject to a number of name changes, initially an effort to overcome the negative publicity that followed the inception of Euro Disney.