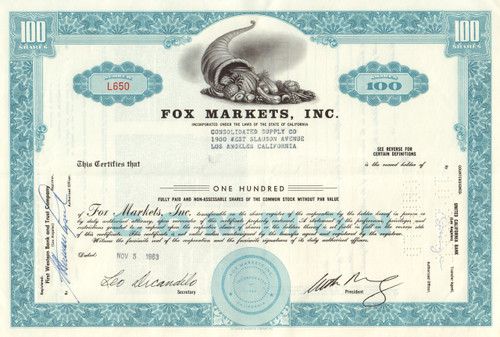 Nice grocery piece with a vignette of a cornucopia with a flow of vegetables including celery, pineapple, pumpkin, grapes, and more.  Issued and cancelled. Dated in the 1960's.

Incorporated in California in 1953, Fox Markets operated a chain of supermarkets. The company filed for bankruptcy in 1964.  The company merged with Food Fair Stores (majority shareholder) in 1964.

Food Fair, also known by its successor name Pantry Pride, was a large supermarket chain in the United States. It was founded by Samuel N. Friedland, who opened the first store (as Reading Giant Quality Price Cutter) in Harrisburg, Pennsylvania in the late 1920s. As of 1957, Food Fair had 275 stores, and at its peak, the chain had more than 500 stores. Friedland's family retained control of the firm through 1978, when the chain entered bankruptcy.