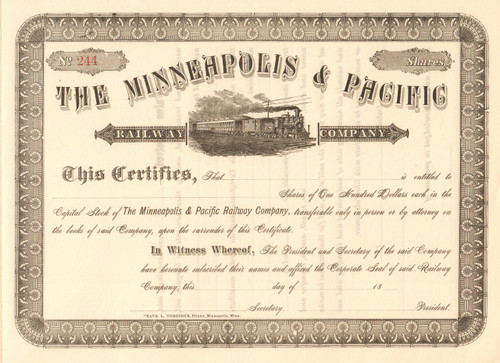 Rare MN railroad piece with older steam train vignette. Unissued and not cancelled. Circa 1884 from company records. Dated 188_ on the stub.

The Minneapolis, Sault Ste. Marie and Atlantic Railway Company was organized and incorporated by William Drew Washburn, Thomas Lowry, Clinton Morrison, C. M. Loring, W. W. Eastman, Charles Pillsbury, and others in September, 1883, to construct a line from Minneapolis through Wisconsin to Sault Ste. Marie. The first train left Minneapolis for Sault Ste. Marie in January, 1888. The Minneapolis and Pacific Railway Company was chartered in 1884 to build westward and by 1886 had reached into Dakota Territory. The first board of directors included W. D. Washburn and Thomas Lowry. Two other lines, the Aberdeen, Bismarck and Northwestern (which Lowry controlled by 1888) and the Minneapolis and St. Croix railway companies were also controlled by the milling interests and were component parts of the developing rail system.

Later in the 1880s the millers needed additional financing for both construction and operational purposes. They were able to get it from financiers associated with the Canadian Pacific Railway Company, Montreal, who thereby gained controlling interest in the four small lines. They demanded as a condition the consolidation of the four lines into the Minneapolis, St. Paul & Sault Ste Marie Railway Company (M.St.P.&S.S.M.). Thomas Lowry was the first president of the new 781-mile line, and the Canadian Pacific owned more than half of the stock. The Canadian Pacific also purchased the Duluth, South Shore & Atlantic Railway Company in 1888, giving them an entry into Duluth.

The M.St.P.&S.S.M. filed for bankruptcy on December 31, 1937. The company was reorganized as the Minneapolis, St. Paul & Sault Ste. Marie Railroad Company, effective September 1, 1944. In 1961 the railroad merged with the Wisconsin Central and the Duluth, South Shore &amp; Atlantic railroad companies to create the Soo Line Railroad Company. Soo Line Corp., a holding company controlling the Soo Line Railroad, was formed in 1984. The Soo Line purchased the bankrupt Milwaukee Road in February 1985; the Milwaukee was merged into the Soo in early 1986. The Soo sold its Lake States Transportation Division to Wisconsin Central, Ltd., in 1987.

In 1992 the name "Soo Line" was dropped in favor of "CP Rail System," an umbrella designation that, besides the Soo, included CP Rail and the Delaware and Hudson Railway and under which the Soo operated as the "Heavy Haul - US" business unit.