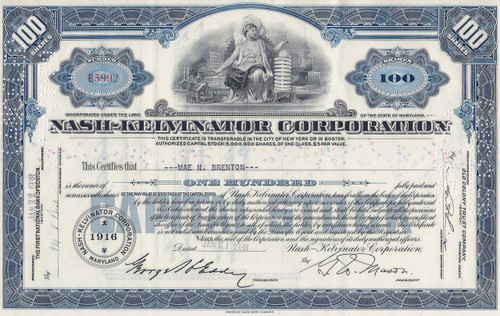 Nash-Kelvinator Corporation was the result of a merger in 1937 between Nash Motors and Kelvinator Appliance Company. The union of these two companies was brought about as a result of a condition made by George W. Mason prior to his appointment as CEO of Nash. Nash-Kelvinator ranked 27th among United States corporations in the value of World War II production contracts.[1]

In 1952, Kelvinator introduced the Kelvinator Food-A-Rama Side by Side Refrigerator, one of the earliest modern side-by-side frost-free refrigerators.[2]Kelvinator consumer products, before and after the merger with Nash, were considered an up-market brand of household appliances.

In 1954, Nash-Kelvinator acquired Hudson Motor Car Company of Detroit, Michigan, in what was called a mutually beneficial merger which formed the American Motors Corporation. Kelvinator continued as a wholly owned division within the new company.

The Kelvinator brand was eventually sold to White Consolidated Industries, which brought the product under its corporate appliance group joining the White-Westinghouse, Gibson, and Frigidaire appliance brands. The appliance division of White Consolidated Industries is now part of Sweden's Electrolux Corporation. The Kelvinator product brand is applied to household appliances worldwide, as well as scientific refrigeration systems.