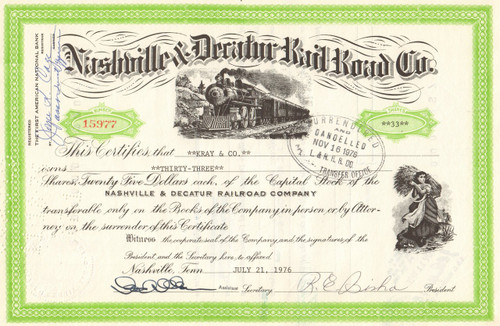 Great double vignette - old steam train at the top and a unique female figure toting a bundle of wheat. Nice older design for a modern certificate.  Issued and cancelled. Dated 1976.

Incorporated 1867 in Nashville TN, this is a modern resurrection of an old L&N line.  Uncommon piece from a rarely seen company.

The railroad of the Nashville and Decatur Railroad Company, herein called the Nashville and Decatur, likewise leased to and operated by the Louisville and Nashville, is a partly double-track, standard-gage line located in the States of Tennessee and Alabama, extending southerly from Nashville, Tenn., to Decatur Junction, Ala., a distance of 119 miles, of which 0.020 mile is jointly owned with another carrier, and southerly from the Tennessee-Alabama State line to Athens, Ala., a distance of 14 miles. The road is double-tracked between Nashville and Brentwood, Tenn., about 10 miles, and Athens and Decatur Junction, Ala., about 13 miles.