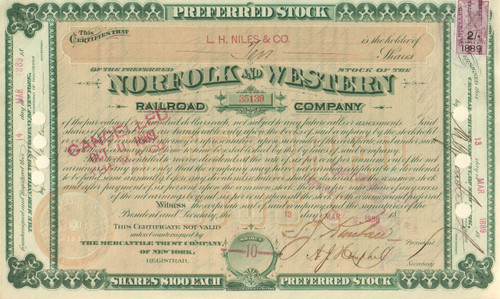 The Norfolk and Western Railway was a US class I railroad, formed by more than 200 railroad mergers between 1838 and 1982. It was headquartered in Roanoke, Virginia, for most of its 150-year existence. Its motto was "Precision Transportation"; it had a variety of nicknames, including "King Coal" and "British Railway of America" even though the N&W had mostly articulated steam on its roster. NW was famous for manufacturing its own steam locomotives, which were produced at the Roanoke Shops, as well as its own hopper cars. Around 1960, NW became the last major American railroad to convert from steam locomotives to diesel motive power.

In December 1959, NW merged with the Virginian Railway, a longtime rival in the Pocahontas coal region. By 1970, other mergers with the Nickel Plate Road and Wabash formed a system that operated track from North Carolina to New York and from Virginia to Illinois. In 1982, NW merged with the Southern Railway, another profitable carrier, to form the Norfolk Southern Corporation (NS), but it continued paper operations until it was merged into the Norfolk Southern Railway in 1997.

NW's earliest predecessor was the City Point Railroad (CPRR), a 9-mile  short-line railroad formed in 1838 to extend from City Point (Hopewell, Virginia), a port on the tidal James River, to Petersburg, Virginia, on the fall line of the shallower Appomattox River. In 1854, CPRR became part of the South Side Railroad, which connected Petersburg with Lynchburg, where it interchanged through traffic with the Virginia and Tennessee Railroad (V&T) and the James River and Kanawha Canal.

William Mahone (1826–95), an 1847 engineering graduate of the Virginia Military Institute (VMI), was employed by Francis Mallory to build the Norfolk and Petersburg Railroad (N&P) and eventually became its president in the pre-Civil War era. Construction of N&P began in 1853. Mahone's innovative corduroy roadbed through the Great Dismal Swamp near Norfolk, Virginia, employed a log foundation laid at right angles beneath the surface of the swamp.

Mahone married Otelia Butler, from Smithfield in Isle of Wight County, Virginia, a daughter of Robert Butler (1784–1853), a Virginia state treasurer. Popular legend has it that Otelia and William Mahone traveled along the newly completed N&P naming stations along the 52-mile tangent between Suffolk and Petersburg from Ivanhoe, a book she was reading by Walter Scott. From Scott's historical Scottish novels, Otelia chose the place names of Windsor, Waverly and Wakefield. She tapped the Scottish Clan "McIvor" for the name of Ivor, a small Southampton County town. When they could not agree, it is said that the young couple invented a new word in honor of their "dispute", which is how the tiny community of Disputanta was named. The N&P was completed in 1858.

William and Otelia Mahone were illustrious characters in post-bellum Virginia. Mahone got quickly to work restoring "his" N&P, and resumed his dream of linking the three trunk lines across the southern tier of Virginia to reach points to the west. He became president of all three, and drove the 1870 merger of N&P, South Side Railroad and the Virginia and Tennessee Railroad to form the Atlantic, Mississippi and Ohio Railroad (AM&O).  The AM&O operated profitably in the early 1870s but like many railroads encountered financial problems during the Panic of 1873. After several years of operating under receiverships, Mahone's role as a railroad builder ended in 1881 when northern financial interests took control.

In 1886, the NW tracks were extended directly to coal piers at Lambert's Point, which was located in Norfolk County just north of the City of Norfolk on the Elizabeth River, where one of the busiest coal export facilities in the world was built to reach Hampton Roads shipping.  The opening of the coalfields made NW prosperous and Pocahontas coal world-famous. By 1900, Norfolk was the leading coal exporting port on the East Coast.

NW operated profitably through World War I and World War II and paid regular dividends throughout the Depression. During World War I, NW was jointly operated with VGN under the USRA's wartime takeover of the Pocahontas Roads.

VGN was conceived and built by William Nelson Page and Henry Huttleston Rogers. Page had helped engineer and build the Chesapeake & Ohio Railway (C&O) through the mountains of West Virginia and Rogers had already become a millionaire and a principal of Standard Oil before their partnership was formed early in the 20th century. Initially, their project was an 80-mile long short line railroad. After failing to establish favorable rates to interchange coal traffic with the big railroads, the project expanded. Rogers was apparently a silent partner in the early stages, and the bigger railroads did not take Page seriously. They accomplished this right under the noses of the pre-existing and much bigger C&O and NW railroads and their leaders by forming two small intrastate railroads, Deepwater Railway, in West Virginia, and Tidewater Railway in Virginia. Once right-of-way and land acquisitions had been secured, the two small railroads were merged in 1907 to form the Virginian Railway.

When the Interstate Commerce Commission (ICC) approved VGN's 1959 merger into NW, it heralded a merger movement and a modernization of the entire U.S. railroad industry. In 1964, the former Wabash; Nickel Plate; Pittsburgh and West Virginia Railway; and Akron, Canton and Youngstown Railroad were brought into the system in one of the most complex mergers of the era. This consolidation, plus the 1976 addition of a more direct route to Chicago, Illinois, made NW an important Midwestern railroad that provided direct single-line service between the Atlantic Ocean and the Great Lakes and Mississippi River.

In 1982, the profitable NW merged with Southern Railway, another profitable company, to form today's Norfolk Southern Railway and compete more effectively with CSX Transportation, itself a combination of smaller railroads in the eastern half of the United States.

Today, former NW trackage remains a vital portion of Norfolk Southern, the nation's 2nd-largest railroad and a Fortune 500 company. Its Norfolk headquarters are near the coal piers at Lambert's Point.