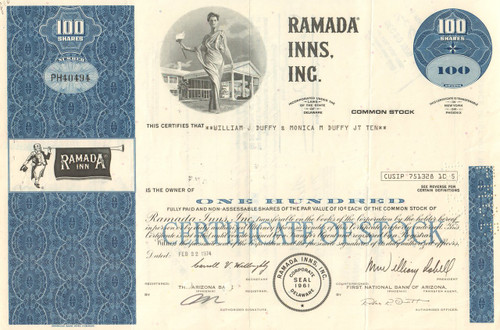 Uncommon issuance from the famous hotel company. Nice vignette of the company logo and mascot of a friendly bald innkeeper (AKA Uncle Ben) to the left and a top vignette of a classical  female figure in front of one of the Inns.  Issued and cancelled.  Dated 1974.

Longtime Chicago restaurateur Marion W. Isbell (1905–1988) founded the chain in 1953 along with a group of investors including Michael Robinson of McAllen, Texas (who later went on to start Rodeway Inns in the early 1960s) and Del Webb of Phoenix (who owned the New York Yankees and went on to establish his own lodging chain, Hiway House, in 1956). Other original investors of Ramada Inns included Bill Helsing, Isbell's brother-in-law; Max Sherman of Chicago, a produce operator dubbed "The Tomato King"; Chicago attorneys Ezra Ressman and Mort Levin; and Frank Lichtenstein and Robert Rosow of San Antonio, Texas.

Ramada opened its first hotel – a 60-room facility – on U.S. Route 66 at Flagstaff, Arizona in 1954 and set up its headquarters in Phoenix, Arizona, where the chain built the Sahara Hotel on North 1st Street downtown in 1956 and a 300-room Ramada Inn in the 3800 block of East Van Buren in 1958 that would become the chain's flagship property and headquarters. Mr. Isbell, like his contemporary, Kemmons Wilson, the founder of the Holiday Inn hotel chain, devised the idea of building and operating a chain of roadside motor hotels while he was on a cross-country trip with his wife, Ingrid, and their three children. On that trip, Isbell noted the substandard quality of roadside motor courts along US highways at the time. He saw the possibility in the developing market for a chain of roadside motor hotels conveniently located along major highways which would provide lodgings with hotel-like quality at near-motel rates plus amenities such as TV, air conditioning, swimming pools, and on-premises restaurants.

The Ramada name derives from the Spanish term rama (meaning "branch").1 Temporary open air structures called "ramadas", made of brush or branches (similar to an arbor) were popular in Arizona during harvest time. Company websites commonly refer to the structure as a "shady resting place".

Through its early years until the early 1970s, a typical Ramada Inn was built of colonial Williamsburg-style architecture to set it apart from the standardized architectural designs used by competitors such as Holiday Inn and Howard Johnson's. These are properties that have distinctive triple pillars and a white overhang in the front of the hotel, in addition to all-brick architecture. Most of these are now rebranded under various other names, but a few original Ramada Inns of that colonial design continue as franchises of the chain today.

Ramada's logo, from its start in the 1950s until around 1976, featured a friendly bald innkeeper, dubbed "Uncle Ben". He sported an apron (later a suit and tie) and held a top hat in one hand and in the other hand, a red trumpeted banner that read "Ramada Inn Roadside Hotels". From 1976 to 1982, the chain's logo was a simple rounded rectangle that read "Ramada Inn" in the same gothic Western-style lettering of the original design. From 1982 to 2004, Ramada changed to a revised, rounded rectangular design with more "modern" lettering.

The chain at one point was owned by Ramada Inns, Inc., a holding company set up by Isbell to oversee Ramada's various divisions including hotel operations, franchising, real estate, and equipment purchasing. Under Isbell's leadership, Ramada grew into one of the nation's largest lodging chains during the 1960s and 1970s with 100 Ramada Inns in operation by 1964, which grew to 250 in 1970 and nearly 650 by 1976. By the late '70s, Ramada ranked as the second largest hotel chain in the U.S. behind industry leader Holiday Inn. Also during the 1970s, Ramada expanded into worldwide operation by opening new hotels in various European nations and on other continents.

Ramada developed a chain of restaurants, which were located inside the hotels, similar to the Howard Johnson's restaurants. Ramada operated them under various names including Uncle Ben's Kitchen, Ramada Pancake Cottage, and Chez Bon, as well as other names used by individual franchises. The company-owned Ramada restaurants became defunct in 1990, though the franchised hotels still include on-premises restaurants.

In an attempt to revive the company's lagging business, Ramada Inns, Inc. in 1989 decided to split its hotel/restaurant businesses and its gaming businesses. The Ramada hotels and restaurants were sold for $540 million to New World Development Company and the gaming business which included the Tropicana Las Vegas, Tropicana Atlantic City, and Ramada Express in Laughlin, Nevada, were spun off to a new company called Aztar Corporation. In the original deal for the gaming business, Ramada shareholders were to get $7 in cash per share plus half a share of the new Aztar Corporation. However, this changed quickly to a new deal where shareholders would receive $1 per share plus one share of Aztar Corporation. In the late 1990s, Ramada was sold to Cendant Corporation of New York City.