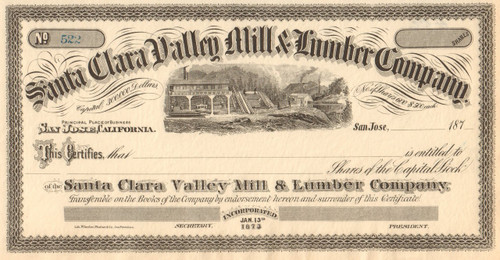 Fantastic California collectible stock cert with a great vignette of an early lumber mill.  Unissued and not cancelled. Smaller cert measuring approx 5" by 10". Printed 187_ on the certificate. Circa 1873 from company history. Very nice item for framing.

Incorporated in San Jose Ca in 1873, the company produced lumber and clay bricks. The lumber mills of the company were located in the Santa Cruz Mountains, about twenty-five miles from San Jose, on the line of the South Pacific Coast Railroad, where they also owned eight thousand acres of timber lands.

Like the center of the population of our Union, the heart of its lumber belt has, during the last century, moved steadily westward from the then unbroken forests of Maine, through the wooded regions of the south, and of the Great lakes, to the Pacific coast, where, in the three states, California, Oregon and Washington, is a at least one-third of the supply of the standing timber of the United States.  In the development of this gigantic industry upon which the present and future prosperity of California so largely depends, William Patrick Dougherty, for many years one of  the leading citizens of San Jose, was an important factor, and well deserved the title given him, the "Lumber King of the Santa Clara valley."

A native of Ireland, William Patrick Dougherty was born in 1832 (died 1900).  Accompanying his parents to America when a child, he was reared and educated in Edina, Mo.  Coming to the Pacific coast a few years after attaining his majority he settled in California, in 1858 taking up his residence in Santa Clara county.  Beginning his business career as a lumberman, he was engaged in getting out timber on the Santa Cruz mountains for a year, and was so successful in his venture that he saved enough money to warrant him in buying a farm.  Purchasing the Naglee estate, in San Jose, he settled down as a ranchman, and from 1859 until 1864 carried on general farming.

Finding lumbering much more profitable and congenial as an occupation, he then resumed his former occupation.  With characteristic enterprise and forethought he bought large tracts of standing timber, erected sawmills, and in the course of time, by wise management, founded an immense business in his particular line of industry.  As his business increased he was enabled to obtain concessions from the railroad companies, and as president of the Santa Clara Valley Mill Company he had practical control of the lumber interest of this county for many years. He subsequently founded the Dougherty Lumber Company, which is still in existence, being one of the leading lumber corporations of the state.

A man of great executive and financial ability, Mr. Doughterty became identified with other business organizations of importance and prominence, becoming controlling owner of the San Jose Brick Company, of which he was manager for many years, and was also a director, and the vice- president of the Hotel Vendome Company.  He was charitable, and generous almost to a fault, contributing liberally towards all enterprises of a beneficial nature, and being ever among the foremost to advance the welfare of the city or county. He was everywhere esteemed and respected, and his death, which occurred at his home, No. 460 North First street, San Jose, March 18, 1894, was deeply deplored as a public loss.

In 1861 Mr. Dougherty married Jane O'Connor.  She died in 1882, leaving three children, William Patrick, James and Mr. Elizabeth Renee of San Jose.  In 1890 Mr. Dougherty married for his second wife Miss Anna Fenton, the wedding being one of the leading social events of that season in San Jose.  Of this union two children were born, namely; Leonore, born in 1891; and Bradley, born in 1893.  Mrs. Dougherty has continued the management of her husband's business and business affairs ever since his death, and has met with eminent success.  She is a woman of culture and refinement, possessing great force of character and a large stock of sound sense and practical ability.

The company had a basic lock on the Northern Santa Cruz Mountains. From 1881 to 1887 their mill at Zayante fed 20 to 40 carloads a day to the South Pacific Coast. From 1887 until 1914, after the South Pacific Coast extended their line seven miles from Felton to Boulder Creek, the SCVM&LC harvested most of the first growth trees in the San Lorenzo Basin. During this time they built their own six mile line known as the Boulder Creek & Pescadero to service that cutting. The Dougherty's also had the ear of Timothy Hopkins and the Southern Pacific interests regarding the southern mountains. In 1883, the seven mile long Aptos Creek Canyon lay basically virgin. Under the name of the Loma Prieta Lumber Company and the Loma Prieta Railroad, they started out of Aptos and for the next fifteen years harvested the Canyon.