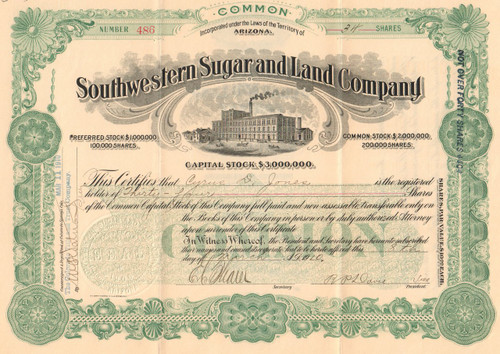 Awesome piece from a rare Arizona sugar company with a great vignette of the company's factory.  Issued and not cancelled. Dated 1910.

On October 20, 1908 Mr. Davies and Mr. McKinnie filed with the Arizona Corporation Commission to form the Southwestern Sugar and Land Company. The Company incorporated in what was considered a very secure financial position with $200,000 in its treasury and no bonds or debts.

With the factory in the hands of new owners, Phoenix newspapers were again reporting encouragingly of the high sugar content and longer growing season of valley beets. They were promoting the idea of two crops per year, allowing the factory to operate the year round and they were always reflecting on the financial stability of the company.  The first bag of sugar for the 1909 season came from the factory on June 15, and was given to W. J. Murphy, who worked long and persistently to bring about the success of this venture and had to interest the right men in the industry."

The water problems of previous years had been solved with the drilling of wells on factory property. It was discovered that just one well was able to supply the three-million gallons a day required for proper operations. But even with ample water the factory was only in operations for two months, closing on August 5, 1909. The sugar output for the year was 5,000,000 pounds, coming from 49,630 tons of beets at a value of $4.78/ton allowing the company to call the season a success, even though they made no money.

In February 1910, an estimated 7,500 acres were planted in beets and expectations for the coming season were high. That same month the magazine Arizona ran an article on sugar beets which began: "The cultivation of sugar beets in the Salt River Valley promises to be in the very near future one of our greatest industries."The article mentioned the high sugar content of  valley beets, the high prices paid per ton, the excellent growing season, and the easy access to a market.

The 1910 season began on June 16, with only a small write-up in the Mesa section of the Arizona Republican, stating two carloads of beets had been shipped. In July it was reported that most of the fields had been frost bitten in November and then suffered from an extra hot spell in May. These weather conditions caused a severe decline in the amount of beets per acre; production fell from 25 tons per acre in 1909 to 8 tons per acre in 1910.

The 1911 season began on June 12, the earliest the factory ever begun operations, with very high expectations, the earliest the factory had ever begun operation. But only 3,200 acres were planted, about one-fourth less than in 1910, though the yield per acre was expected to be greater. The company was expected to pay out $200,000 for beets and $100,000 for factory labor, and aid in the prosperity of the whole valley.

In the hope of increasing crop production in coming seasons, Southwestern Sugar & Land Company imported Russian families, from Southern California, to farm sugar beets in the Glendale area. The land development company of Greene and Griffin, a subsidiary of Southwestern Sugar & Land, brought 175 adults and their families to the valley on August 31, 1911. They bought between five and forty acres for $100 to $125 per acre at sections two miles west and one mile south of Glendale, along 75th Ave, between Glendale Ave. and Bethany Home Road. Soon more came from California, until by 1920 there were 4 separate Russian villages, each a congregation of varying Spiritual Christian faiths, with their own presbyters (lay ministers), occupying more than 8 square miles along 75th and 83rd avenues, to McDowell road near Tolleson. These families grew sugar beets and when not farming their lands, they worked on company farms or at the factory. With this added labor the sugar beet industry in the valley looked promising.

The 1912 season opened on June 20, without much fan fare, and closed on August 12, after only a forty-day run. Tempe farmers called harvesting to a halt before all beets were harvested because they could not get them to the factory before it closed. The factory produced 3,600,000 pounds of sugar from 2,500 acres of beets and it was estimated that farmers and merchants made between $150,000 and $200,000 during the season