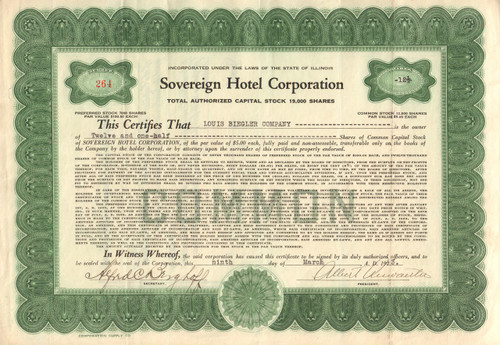 Great historical collectible from the Edgewater area of Chicago.  Grand hotel from the 1920s.  Issued and not cancelled. Dated 1923

The Sovereign Hotel was built on Granville in the early 1920s and represents part of the urbanization of this Edgewater neighborhood. It replaced three homes that had been built in the 1890s on 50 foot lots. The building permit for the hotel is dated June 9, 1922. It was built by the Albert Hotel and Building Corporation. The architect was W. Ahlschlager and the contractor was B.W. Construction. It was completed in 1923. Its architectural style is Beaux Arts, an ornate style that signaled luxury and opulence of the late 19th century France.

When the hotel opened, the Duke of Windsor visited and presented two ornate vases, which are displayed in a sitting room. The Duke later became King Edward VIII and then abdicated the throne in order to marry the American divorcee, Wallis Simpson.

From the exterior of the building, the elegant terra cotta cornice is a landmark detail that makes this building easily recognizable. The sides facing Granville and Kenmore are a mixture of brick and limestone. At the street level, the limestone extends to the second floor. The large first floor windows have been set in a pattern with the second floor windows inside an arch shape that meets above them. This design is repeated along the top floor just below the cornice. Decorative limestone details accent the façade.

Between the large windows are smaller single windows that follow a pattern up the side to the top. The building is ten stories high. The original hotel had 600 rooms, two ballrooms and a swimming pool. Imagine the change this building brought to this area of single family homes and two-flats - hundreds of visitors and new residents.

In 1949, the hotel was converted to apartments and the number of units dropped to 234. The apartments range in size from studios to one bedrooms. Because of the height of the building, there are views of the lake from the upper floors.

The front entrance has been modernized with a canopy and wind-break in a simple design. The wind-break offers some protection from the winds off the lake. You will see one of the ballrooms and the pool.