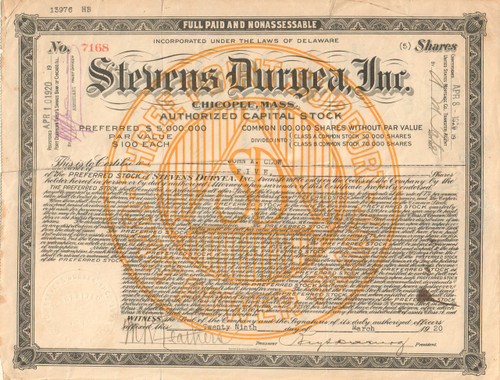 Rare collectible automotive piece with a nice under print of the company logo.  Issued and not cancelled. Small ink stain to the lower right.  Blank at the lower left for company seal that were never added. Dated in the 1920.

Stevens-Duryea was an American manufacturer of automobiles in Chicopee Falls, Massachusetts between 1901 and 1915 and 1919 to 1927.

The company was founded after a falling-out between J. Frank Duryea and his brother Charles in 1898. In 1900 Frank went on to form Hampden Automobile and Launch Company where he developed a new automobile and looked for a manufacturer to produce it. J. Stevens Arms and Tool Company who were about to enter the developing car business, entered into a partnership with Frank and took over the factory of steam car and bicycle maker Overman.

Stevens-Duryea's first product was a two-cylinder, 5 hp Runabout that sold for $1,200.00 in 1901. No production numbers are known for 1901 but the firm produced 61 cars in 1902 and 483 in 1903. By 1904 the runabout, a tube chassis 6 hp (4.5 kW) flat twin buggy runabout Victoria, was called the Model L. It had a flat-mounted water-cooled straight twin, situated amidships of the car, four speed gearbox (three forward, one reverse), wire wheels, full-elliptic springs, and tiller steering. Weighing 1300 lb, it sold at US$1300. This would be imported to Britain by Joseph Baker, but would not succeed there; in the U.S., it would survive several years. It was joined in 1905 by the US$2500 Model R, an aluminum-bodied, five-seat, 20 hp four with three-speed gearbox and live axle.

The model line grew in 1906, adding a US$2400 runabout and a US$3300 limousine. There was also the new Big Six, with a 9.6 liter six cylinder motor, seven-seater tulipwood body, weighing 2900lbs, at US$5000. In 1907, both the L and R were dropped, and Stevens-Duryea focused on sixes. Yet the company was hampered by the shortage of skilled labor; only some fifty units were sold in 1904, and maximum production did not exceed 100 a year.

The 1915 Model D was the company's last new design, an 80 hp 472ci six. It was this year Frank Duryea sold out; production stopped in 1915 because of financial problems and the plant was sold to New England Westinghouse Company. Several former employees bought the name and goodwill and in 1919 restarted production of the D as the Model E, at a stratospheric US$9500.

This did not improve the company's prospects, and it was purchased by Ray Owen (of Owen Magnetic) in 1923 to produce gas and electric cars under the Rauch and Lang brand, in a factory next to the Stevens-Duryea factory. A new model Stevens-Duryea was announced, the Model G, but this was basically the same as the Model E. After only 28 cars were sold in 1924, manufacture of the Model G continued on an orders received basis until 1927.