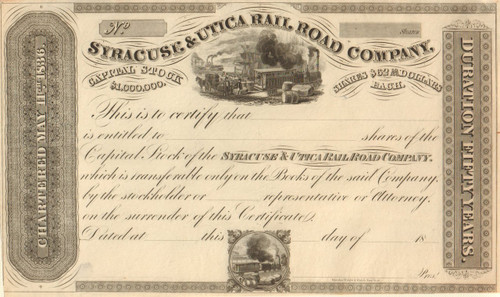 The Syracuse and Utica Railroad was chartered May 1, 1836, and had to pay the state for any freight displaced from the Erie Canal. The full line opened July 4, 1839, extending the line further to Syracuse, New York to Rome, New York (and further to Auburn, New York via the already-opened Auburn and Syracuse Railroad). The road was consolidated into the New York Central Railroad in 1853.

This was the second railroad that was organized along a route from Syracuse to Utica. The route went through Oneida and Rome, a distance of 53 miles. On July 1, 1837, the village of Syracuse gave consent to a right of way along Washington Street for the railroad. The station in Vanderbilt Square was used by this railroad as well as the Auburn and Syracuse Railroad.

This line was not direct, going out of its way to stay near the Erie Canal and serve Rome, and so the Syracuse and Utica Direct Railroad was chartered January 26, 1853, however, nothing of that line was ever built and the company was merged with the West Shore Railroad and was acquired by the New York Central Railroad in 1885 which served the same purpose as the direct line.

John Wilkinson, first postmaster of the village of Syracuse, who had given the village its name from the title of a poem, was president of the Syracuse and Utica Railroad. Charles B. Stebbens was vice-president. Vivus Smith served as the first secretary. As a result of their efforts, the railroad was headquartered in Syracuse instead of Utica, providing the village with an important industry.

Wilkinson, as president, ordered the construction of the first "flat car" for the line after passengers complained they needed a car in which they could carry purchases made in Syracuse back to Utica. This was the first "so-called" freight car in the nation, the forerunner of the modern freight business. In 1853, directors of the company were John Stryker, Oliver Teall, Joel Rathbone, E. W. Leavenworth, Hamilton White, Holmes Hutchinson, Samuel French, D. Wager and Joseph Battell.

Daniel Elliott was the architect and builder of the Syracuse and Utica Railroad depot which was a "striking exhibition of architectural skill and beauty." The depot was occasionally used for political or village meetings and public addresses. Noted characters were frequently received there including Martin Van Buren, Henry Clay and Gerrit Smith. At first, the building served its purpose very well, but soon became too cramped for convenience and the offices were "one by one removed to other quarters near by," where they remained until a new depot was constructed on Franklin Street.