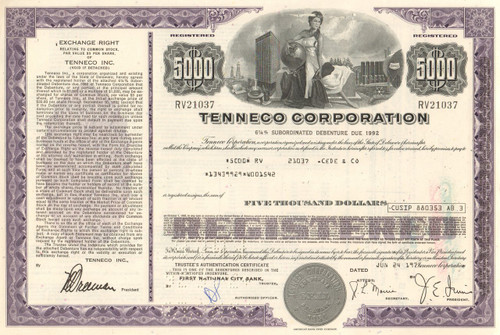 Great collectible $5000 bond with a beautiful vignette of a classical female figure holding a globe in front of city and oil refinery scenes. Issued and cancelled. Dated 1970's.

Tenneco (formerly Tenneco Automotive and originally Tennessee Gas Transmission Company) is an American Fortune 500 company that has been publicly traded on the NYSE since November 5, 1999 under the symbol TEN. Tenneco, with headquarters in Lake Forest, Illinois, United States is an automotive components original equipment manufacturer and an after-market ride-control and emissions products. In 2011 it reported a revenue of $7.2 billion.

Tenneco, Inc.'s origin was in the Chicago Corporation, established about 1930. Tennessee Gas and Transmission Company (completely separate) had been formed in 1940. A shortage of fuel for World War II defense industries in the Appalachian area developed when industrial production was increased. The nuclear development operations of the Manhattan Project at Oak Ridge, Tennessee consumed huge quantities of Tennessee Valley Authority electrical power that would have otherwise been available to other industrial operations. The Chicago Corporation was able to acquire a Federal Power Commission (FPC) license to operate pipelines from New England. These pipelines, once owned by the El Paso Corporation, are now split up and owned in part by Kinder-Morgan and TransCanada.

In the 1950s, the company acquired existing oil companies, including Sterling Oil, Del-Key Petroleum, and Bay Petroleum. The Tennessee division of the Chicago Corporation acquired Tennessee Gas Transmission Company in 1943 to build a natural-gas pipeline 1,265 miles from Texas to West Virginia. The first line was completed in October 1944. It was followed by three additional pipelines totaling 3,840 miles during the next 15 years which provide gas to New York and New Jersey.

Tenneco Inc. emerged from a conglomerate consisting of six unrelated businesses: shipbuilding, packaging, farm and construction equipment, gas transmission, automotive, and chemicals. The automotive division was spun off from Tenneco, Inc. in 1991 along with the packaging, energy, natural gas, and shipbuilding divisions. All businesses except automotive and packaging were disposed of between 1994 and 1996 (through public offerings, sales, spin-offs and mergers). In 1999, Tenneco Packaging was spun off and renamed to Packaging Corporation of America (Pactiv Corporation).

Since the 1960s Tenneco Automotive sold mufflers (UK: silencers) in Europe, including through the chain "Pit Stop" in Germany. The group bought a German factory in Virnheim in 1969, Swedish Starla in 1974 and French Bellanger and English Harmo Industries in 1976 and Danish Lydex in 1978. More acquisitions followed. On October 28, 2005 the name was changed from Tenneco Automotive to Tenneco. Tenneco (under the Tenneco Automotive name) sponsored CART's Detroit Grand Prix from 1999 until the race's cancellation after 2001.