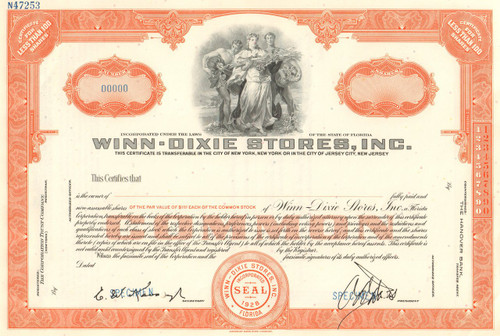 Nice grocery store piece featuring a vignette of three classical figures holding a basket of vegetables, a pumpkin, and a bundle of corn stalks.  Unissued and cancelled. Specimen (sample) issuance, crisp and clean.

Winn-Dixie Stores, Inc. is an American supermarket chain based in Jacksonville, Florida. Winn-Dixie has ranked number 24 in the 2010 "Top 75 North American Food Retailers" based on FY2009 estimated sales of $7.3 billion by Supermarket News. and was ranked the 45th largest retailer in the United States based on 2012 revenues by Stores magazine. Winn-Dixie currently operates 485 stores in Florida, Alabama, Louisiana, Georgia, and Mississippi. The company has had its present name since 1955 and traces its roots back to 1925.

Prior to filing for Chapter 11 bankruptcy in 2005, Winn-Dixie was listed in the S&P 500 and had been traded on the New York Stock Exchange under the ticker symbol "WIN" since February 18, 1952. The company was traded under the symbol "WINN" on the NASDAQ before its purchase. The bankruptcy also left the chain with fewer stores than it had in the late 1960s.

On December 19, 2011, BI-LO, another Southeastern supermarket chain, announced plans to purchase Winn-Dixie. On March 9, 2012, Winn-Dixie became a wholly owned subsidiary of BI-LO Holding and Winn-Dixie's ticker symbol was removed from the NASDAQ. BI-LO Holdings announced at the time of acquisition that the merged company will be based in Winn-Dixie's former headquarters in Jacksonville. BI-LO had previously been based in Greenville, South Carolina.

Winn-Dixie was founded and built up by William Milton Davis and his sons Artemus Darius Davis, James Elsworth Davis, Milton Austin Davis and Tine Wayne Davis. William Davis started in business in Burley, Idaho, where he bought a general store in 1914 that he later renamed Davis Mercantile. As was common then, he sold most goods on credit. The advent of cash-only grocery stores in the 1920s hurt Davis' business, as the new stores offered lower prices and larger selections.

In 1925, William Davis borrowed $10,000 from his father and moved to Miami, Florida, where he purchased the Rockmoor Grocery. In 1927, the company was renamed Table Supply, and four more stores were opened. In 1931, the Davis family bought the Lively Stores chain for $10,000, to create a chain of 33 Table Supply stores across Florida from Miami to Tampa. William Milton Davis died in 1934, leaving his four sons in charge of the company.

In 1956, Winn-Dixie bought Ketner-Milner Stores in North Carolina, Hill Stores in Louisiana and Mississippi, and King Stores in Georgia. In 1967, Winn-Dixie bought the City Markets chain in The Bahamas, effectively extending into The Caribbean. Operating 12 stores through its domestic subsidiary, W-D (Bahamas) Limited, the chain's competitors included the domestic Super Value Food Stores and Grand Union's own Caribbean operations until it sold the chain to Bahamian investors in 2006. In 1995, it expanded with the purchase of the Cincinnati-based Thriftway Food Drug. In 2000, it acquired Jitney Jungle

Although Winn-Dixie Stores (and its predecessor, Winn & Lovett) has been publicly traded since 1952, the Davis family has always maintained control of the corporation. As of February 2005, when the company entered bankruptcy, the heirs of William Milton Davis still held about 35 percent of Winn-Dixie stock. The Davis brothers endowed the Stetson University School of Business Administration with a building, Davis Hall, which was dedicated in 1967. On the dedicatory plaque inside the building, below the names of the donors, there was written the inscription, "Learn management that you may produce or distribute goods and services to improve the living for the people and produce a good return on invested capital for investors."  In the 90's Winn Dixie gave a generous contribution to the Boy Scouts of America of the Central Florida Council, resulting in the renaming of Camp La-No Che as the "Winn-Dixie Scout Reservation".

In 2003, when the chain had over 1,000 stores, the company's stock was the worst performing of the S&P 500. In April 2004, Winn-Dixie announced the closure of 156 stores, including all 111 stores located in the Midwest. Included were over 20 stores that had operated under the Thriftway name in and around Cincinnati; they had been purchased by Winn-Dixie in 1995. The company had been hit hard by competition, especially from Publix and Wal-Mart. Another 40 stores in the Atlanta area were converted to their Save Rite Grocery Warehouse brand, as an alternative to store closure. Also, the company announced it was pulling out of North Carolina, South Carolina and Virginia altogether.

On February 22, 2005, Winn-Dixie filed for bankruptcy. On June 21, it announced the sale or closure of 326 stores, resulting in the loss of over 22,000 jobs. Winn-Dixie closed all its stores in North Carolina, South Carolina, Tennessee, Texas, and Virginia. Once the restructuring had completed, Winn-Dixie was to operate in the Bahamas and in five of the Deep South states, operating throughout Florida, the southeastern half of Louisiana, the southeast corner of Mississippi, most of Alabama, and the southwest and coastal corners of Georgia. The closures left Winn-Dixie with fewer stores than it had in the 1950s.

On February 28, 2006, it was announced that 35 more stores were to be sold or closed within the coming months, with the Central and South Florida areas being the most affected. On March 31, 2006, it was announced that the chain would sell its 12 Bahamian locations, which had been operated by a wholly owned subsidiary, W-D, Limited, under the names City Market and Winn-Dixie.

On June 29, 2006, Winn-Dixie announced that it had filed a plan of reorganization with the U.S. Bankruptcy Court for the Middle District of Florida. The company emerged from Chapter 11 protection on November 21, 2006 in a much stronger financial position. Upon emerging from bankruptcy in 2006 Winn-Dixie made great strides toward success, which included a steadfast effort to modernize its existing store base while focusing on new locations for the future. On December 19, 2011, Winn-Dixie agreed to be sold to BI-LO for $530 million or $560 million. As part of the deal, Winn-Dixie became a subsidiary of BI-LO, though its stores will continue to operate under the Winn-Dixie name.

As of March 9, 2012, Winn-Dixie became part of BI-LO Holdings, the parent company of both BI-LO and Winn-Dixie, ending 67 years of Davis family ownership. Altogether, the combined company operates 690 stores in eight southeastern states, employing approximately 63,000 team members. The merged company is based in Winn-Dixie's former headquarters in Jacksonville. BI-LO was previously headquartered in Greenville, S.C.