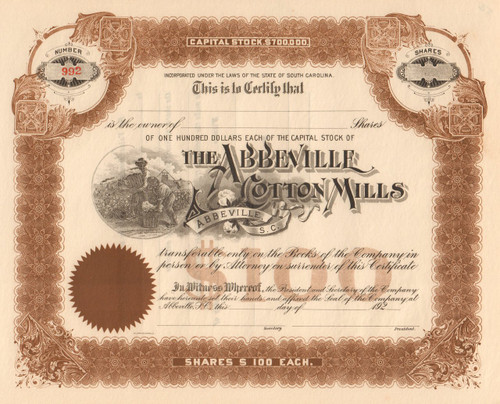 Abbeville Cotton Mill was organized when a group of local investors met early in 1895.  The New South message of D. A. Tompkins was proving to be good business advice for many southern towns.  The objective was “to build a factory for the manufacturing of coarse cotton cloth.”  Officers selected were: Judge J. C. Klugh, president; G. A. Visanska, a banker, vice-president; and W. H. Parker, treasurer.  Six directors were also selected.  The sale of stock was not an immediate success.

The factory “showed its first signs of life on March 4, 1897.”  Water was added to the boiler, a fire was kindled and at exactly 5:00 PM, “the steam engine’s great drive pulley began to turn.”Throughout the summer and fall of 1897, machinery was installed and readied.  As soon as practical, trial runs were made.  In December 1897, the mill was in full production, about nine months after machinery began arriving.  Only one style of goods was produced – a coarse cotton cloth known as “three-yard sheeting.”  The fabric was 36 inches wide, and as the name implied, weighed three yards to the pound.  Each piece was stamped with the mill’s new trademark – the outline of three rabbits, one large, two small.   Cloth was shipped in bales tied with rope.

The first addition to the mill was begun in January 1899 and was completed in May 1900. Three hundred and thirty-six Northrop looms were installed.  In order to run these looms, the yarn mill had to run both a day and a night shift.  Draper records show 940 looms installed by 1900.  The numbers remained until at least 1916

The Great Depression in the 1930’s was a difficult time for all.  Abbeville did not escape unscathed.  Business slowed and in 1931, the mill completely closed for approximately three months.  Help for the employees came from the Red Cross and from management. Seth Milliken may have become a majority stock-holder at this time. In 1934, struggling with the Depression and looking for a way to distinguish their product from others, management decide to try the new wonder fiber “rayon.”   With increasing success of this new product, the mill came back to life and gradually eliminated cotton as the fiber in production.  In 1937, the name of the company was changed to Abbeville Mills.

In 1943, Deering-Milliken & Co. purchased the Abbeville Mill in its entirety from the stock holders.  In several other locations Deering Milliken & Co. had controlling interest but did not own all the stock, but operated the facility. This was in the middle of war production when the mill produced fabrics for artillery powder bags, raincoat fabric, uniform fabrics for the Navy’s Waves, and parachute fabric.  By the late 1940's the plant used synthetic fibers and, in some fabrics, blended with wool (worsted tops).