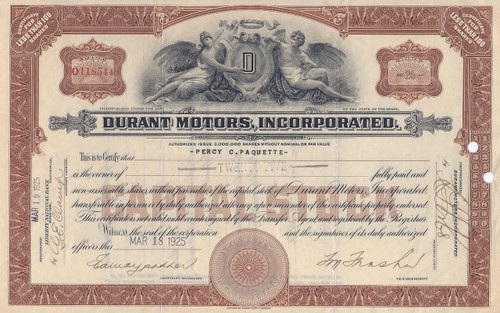 Durant Motors Inc. was established in 1921 by former General Motors CEO William "Billy" Durant following his termination by the GM board of directors and the New York bankers that financed GM.

Durant Motors attempted to be a full-line automobile producer of cars and fielded the Flint, Durant, and Star brands which were designed to meet Buick, Oldsmobile, Oakland, and Chevrolet price points. Billy Durant also acquired luxury-car maker Locomobile of Bridgeport, Connecticut, at its liquidation sale in 1922; in theory, Locomobile gave him a product that would compete against Rolls Royce and Pierce-Arrow. Durant Motors had a relationship with the Dort, Frontenac, and DeVaux automobile name badges. The Rugby line was the export name for Durant's Star Car line. However, from 1928 to 1931, Durant marketed trucks in the US and Canadian markets under the badge Rugby Trucks. The Princeton, a model aimed at the Packard and Cadillac price point, was planned but never realized; also planned was the Eagle car line, but it never made it off the drafting tables.

Durant cofounded a truck-making subsidiary, Mason Truck, and also acquired numerous ancillary companies to support Durant Motors. In 1927, the Durant line was shut down to retool for a brand new modernised car for 1928, re-emerging in 1928 with Durant, Locomobile, and Rugby lines in place, and dropping the Mason Truck and Flint automobile lines and top-selling Star car in April 1928. In 1929, Locomobile went out of production.

Initially, Durant Motors enjoyed success based upon Billy Durant's track record at General Motors, where he assembled independent makes Chevrolet, Oakland, Oldsmobile, Buick, and Cadillac. However, when sales failed to meet volumes sufficient to sustain Durant Motors holdings, the firm's financial footing began to slip. As a result, Durant Motors began losing market share and dealers. The final models, produced under the Durant brand, rolled off the US assembly line in Aug 1931 at Lansing, but continued in Canada into 1932 under Dominion Motors, which also built the Frontenac.

The Lansing, Michigan, Durant plant on Verlinden Avenue opened in 1920. After the demise of Durant, it remained closed until GM purchased it in 1935. It restarted production for GM's Fisher Body division, later becoming the Buick-Oldsmobile-Cadillac factory. It was finally combined with another Lansing plant to become Lansing Car Assembly. That factory was closed on May 6, 2005.

Durant's former plant in Elizabeth, New Jersey, housed one of the first supermarkets in the 1930s, then was used as a cookie bakery by Burry Biscuits for many years. It was in use as a warehouse when it was destroyed by fire in December 2011.