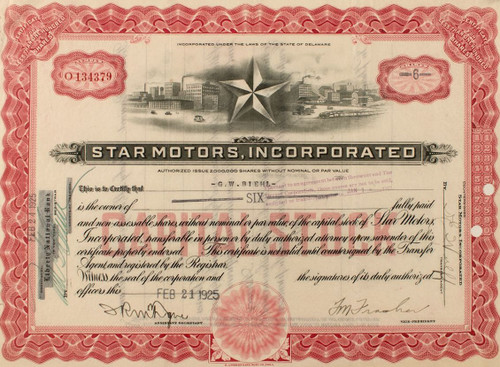 The Star was an automobile marque that was assembled by the Durant Motors Company between 1922 and 1928. Also known as the Star Car, Star was envisioned as a competitor against the Ford Model T. (In the United Kingdom, it was sold as the Rugby, to avoid confusion with the British marque.)

Like other products of the Durant Motors Company, the Star was an "assembled" car, built from parts supplied by various outside companies. Originally, Stars were powered by a four-cylinder engine; in 1926 the line introduced a six-cylinder engine. All factory-installed engines were built by Continental.

In 1923, Star became the first car company to offer a factory-built station wagon (instead of shipping a chassis out to a custom builder who added the wooden wagon body). For the early part of the 1928 model year, the Star was known as the Durant Star and was only available with a four-cylinder engine. The car was replaced in the later half of the 1928 model year by the Durant 4.