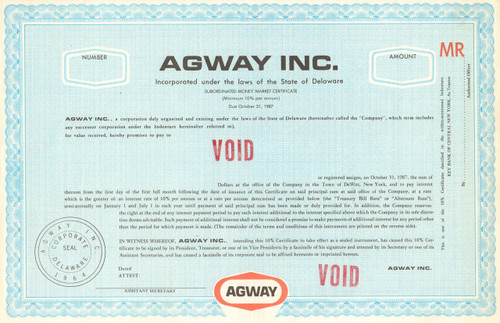 Agway of DeWitt, New York, is an American agricultural business that offers feed for livestock and poultry, as well as seed, fertilizers, and herbicides. Agway was formed on July 25, 1964, from a merger between the Grange League Federation and Eastern States Farmers' Exchange. In 1965 the Pennsylvania Farm Bureau Cooperative merged into Agway.

In 1980, Agway purchased dairy company HP Hood of Lynnfield, Massachusetts. It was sold to Catamount Dairy Holdings, LP of Boston in 1996 as part of downsizing due to overall financial losses since 1990. Agway also owned a significant share of Curtice-Burns Foods, Inc. of Rochester, New York from 1966 to 1994, part of holding company Pro-Fac Cooperative, Inc. from nearby Pittsford, New York which included the Birds Eye frozen foods brand.