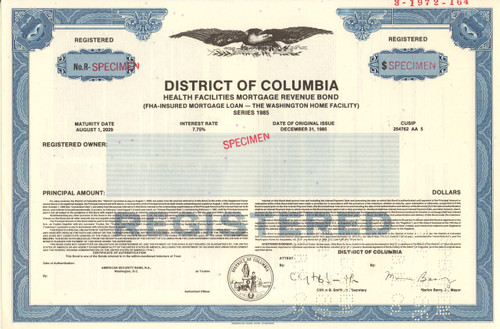 Washington, D.C., formally the District of Columbia and commonly referred to as "Washington", "the District", or simply "D.C.", is the capital of the United States. The signing of the Residence Act on July 16, 1790, approved the creation of a capital district located along the Potomac River on the country's East Coast. The U.S. Constitution provided for a federal district under the exclusive jurisdiction of the Congress and the District is therefore not a part of any U.S. state.

The states of Maryland and Virginia each donated land to form the federal district, which included the pre-existing settlements of Georgetown and Alexandria. Named in honor of George Washington, the City of Washington was founded in 1791 to serve as the new national capital. In 1846, Congress returned the land originally ceded by Virginia; in 1871, it created a single municipal government for the remaining portion of the District. Washington had an estimated population of 672,228 as of July 2015. Commuters from the surrounding Maryland and Virginia suburbs raise the city's population to more than one million during the workweek. The Washington metropolitan area, of which the District is a part, has a population of over 6 million, the seventh-largest metropolitan statistical area in the country.

The centers of all three branches of the federal government of the United States are in the District, including the Congress, President, and Supreme Court. Washington is home to many national monuments and museums, which are primarily situated on or around the National Mall. The city hosts 176 foreign embassies as well as the headquarters of many international organizations, trade unions, non-profit organizations, lobbying groups, and professional associations.

A locally elected mayor and a 13‑member council have governed the District since 1973. However, the Congress maintains supreme authority over the city and may overturn local laws. D.C. residents elect a non-voting, at-large congressional delegate to the U.S. House of Representatives, but the District has no representation in the U.S. Senate. The District receives three electoral votes in presidential elections as permitted by the Twenty-third Amendment to the United States Constitution, ratified in 1961.

On July 9, 1790, Congress passed the Residence Act, which approved the creation of a national capital on the Potomac River. The exact location was to be selected by President George Washington, who signed the bill into law on July 16. Formed from land donated by the states of Maryland and Virginia, the initial shape of the federal district was a square measuring 10 miles on each side, totaling 100 square miles. Two pre-existing settlements were included in the territory: the port of Georgetown, Maryland, founded in 1751, and the city of Alexandria, Virginia, founded in 1749.

A new federal city was then constructed on the north bank of the Potomac, to the east of Georgetown. On September 9, 1791, the three commissioners overseeing the capital's construction named the city in honor of President Washington. The federal district was named Columbia, which was a poetic name for the United States commonly in use at that time. Congress held its first session in Washington on November 17, 1800.

Congress passed the Organic Act of 1801, which officially organized the District and placed the entire territory under the exclusive control of the federal government. Further, the unincorporated area within the District was organized into two counties: the County of Washington to the east of the Potomac and the County of Alexandria to the west. After the passage of this Act, citizens living in the District were no longer considered residents of Maryland or Virginia, which therefore ended their representation in Congress.

On August 24–25, 1814, in a raid known as the Burning of Washington, British forces invaded the capital during the War of 1812. The Capitol, Treasury, and White House were burned and gutted during the attack. Most government buildings were repaired quickly; however, the Capitol was largely under construction at the time and was not completed in its current form until 1868.