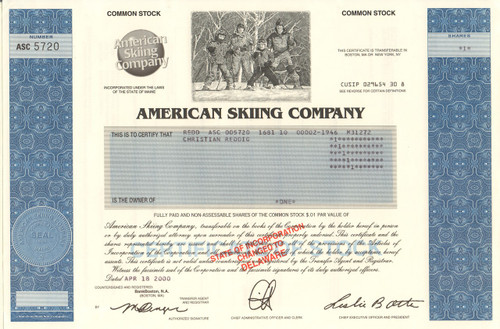 Nice sports collectible. Cool vignette of a family skiing together with trees in the background. Company logo to the left. Issued and not cancelled. Dated 2000.

American Skiing Company was one of the largest operators of alpine ski, snowboard and golf resorts in the United States. Its resorts included Sunday River and Sugarloaf, in Maine and The Canyons in Utah.

In 1980, Les Otten, the son of a German immigrant, purchased the Sunday River resort for $840,000 from the Sherburne Corporation. Sunday River slowly grew to become New England's second most popular resort in the 1990s. In 1994, Otten formed LBO Resort Enterprises Corp and purchased Attitash Bear Peak in New Hampshire. By 1995, Sugarbush, Vermont was added to the portfolio.

By 1997, the company expanded west, buying Wolf Mountain in Park City, Utah. It quickly was transformed into The Canyons, now the largest resort in Utah. In 1998, the company, now known as American Skiing Company went public on the New York Stock Exchange and purchased Heavenly, California and Steamboat, Colorado from Kamori International.

By the time the new millennium rolled around, Les Otten had left the company amidst a huge debt crisis; their earnings had not kept pace with their growth. As the huge debts racked up, ASC was forced to sell Heavenly to Vail Resorts, Steamboat to Intrawest, and Sugarbush to a group of investors. In January 2007, rumors surfaced that ASC might be in the process of selling Killington and Pico to Powder Corporation, and Attitash and Mount Snow to Peak Resorts. It was later confirmed in a letter to the All For One pass holders that Mount Snow and Attitash had been sold to Peak Resorts and that Killington and Pico have been sold to SP Land Company, LLC, who will join with Powder in a new venture to operate the two mountains. In June 2007, ASC announced plans to sell Sunday River and Sugarloaf to Boyne Resorts.