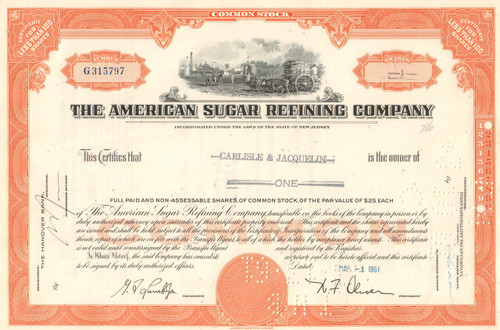 American Sugar Refining, Inc. is a large cane sugar refining company, with a production capacity of 6.5 million tons of sugar. The company produces a full line of consumer, industrial, food service, and specialty sweetener products. In 2013, it adopted the corporate brand name ASR Group. Its ownership structure is based on a partnership which includes the Fanjul brothers, and is based in Florida.

The ASR was incorporated in the state of New Jersey on January 10, 1891, with $50 million in capital. By 1907, it owned or controlled 98% of the sugar processing capacity in the United States and was known as the Sugar Trust. The United States Supreme Court declared in United States v. E. C. Knight Company that its purchase of the stock of competitors was not a combination in restraint of trade. By 1901, the company had $90 million in capital. The company became known as Domino Sugar in 1900.

The combination expanded horizontally for about twenty years as new competitors arose; later it expanded vertically, undertaking the production of cane sugar and raw sugar in Cuba and acquiring lumber interests. The company was investigated by the Industrial Commission in 1900 and by a special congressional committee in 1911–1912. In 1910 the federal government began a suit for the company's dissolution. This was terminated by consent decree announced December 21, 1921, when Domino Sugar stated that its effective control of refined sugar had dropped from 72% to 24%.

According to the Encyclopedia of New York City, "the struggle ended with a settlement in 1922 that allowed the firm to remain intact but forced it to refrain from unfair business practices, and as competition revived, the firm ceased to dominate the industry". After the Great Depression, the sugar refining industry declined as alternatives to sugar and modern technology were introduced.

American Sugar Refining Company continued to dominate the sugar industry in the United States through most of the 20th Century. Its brands included the dominant Domino Sugar, Franklin Sugar, Sunny Cane Sugar, and its West Coast beet sugar operation under the Spreckels brand. It had major refineries in Brooklyn, Bunker Hill, Massachusetts;, Philadelphia, Baltimore, Chalmette, Louisiana; and Salinas, California.

In the early 1970s, the company made major investments in high-fructose corn syrup production, and changed its name to Amstar Corporation (ASR). It moved its headquarters from 120 Wall Street to 1251 Avenue of the Americas (6th Avenue) (The Exxon Building) in mid-town Manhattan. With investments in food-picking and handling machinery companies in the Midwestern United States, the company faced a takeover by the British sugar company Tate & Lyle in 1980.

The Domino brand name is currently associated with a company that also owns two of its former major competitors, C&H Sugar (California and Hawaii) and Jack Frost (National Sugar Company).  American Sugar Refining, Inc. acquired Domino Sugar in 2001, the California and Hawaiian Sugar Company (C&H Sugar) in 2005, Redpath Sugar in 2007, and Tate & Lyle's European sugar operations in 2010. In the European Union, the company owns and operates sugar refineries in England and Portugal, formerly owned by Tate & Lyle. The company’s products are sold through a brand portfolio that includes the premier sugar brands Domino, C&H, Florida Crystals, Redpath, and Tate & Lyle. The company is also the majority shareholder of Belize Sugar Industries, the only sugar mill in Belize.

American Sugar Refining is owned by Florida Crystals Corporation and the Sugar Cane Growers Cooperative of Florida. The main competitor in the USA for refined cane sugar is Imperial Sugar.