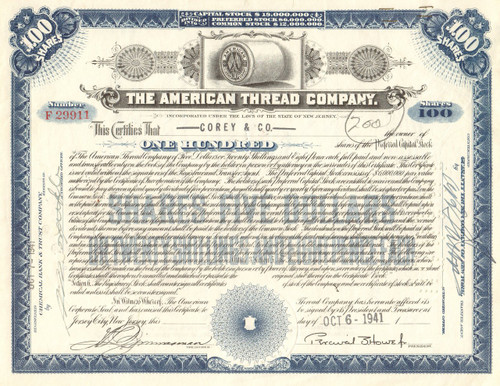 Neat collectible stock with a vignette of the company's spool of thread.  Issued and cancelled. Dated 1940s-1950s.

These mergers of British-based companies made it even harder for U.S.-based companies to compete.  There was fierce competition and price-fixing during the next 15 years.  In 1901, Hopkins testified that the main competitor for American Thread was the Coats operation.  American Thread was founded with a capital of $12 million.  Much of the financing came from Great Britain.  Hoskins explained to a later US commission that not only was the Coats group owned by the British, but a significant part of American Thread was owned by the British.   The intertwining of these British companies and their American subsidiaries was complete.  Fully two-thirds or more of all thread used in the United States was produced by these companies.

Finally, the U. S. Government filed suit in 1913, alleging restraint of trade in violation of the Sherman Antitrust  Act.  By 1914, this action modified the structure of the ownership by splitting the management of all the Scottish-owned mills, but their technological advantage continued to hinder U.S. competition.

American Thread made it through the First World War with factories in the north.  The first Southern factory was built in Dalton, GA in 1925.  By 1928, American operated five plants in the North at Willimantic and Stonington, CT; Fall River and Holyoke, MA; and Milo, ME. The Hadley plant in Holyoke was sold in 1928.  Later, in 1945, a plant was purchased in Clover, SC.

In 1985, life in Willimantic, Connecticut – and in the other old industrial cities and towns of southern New England – changed forever. The American Thread Company, the city’s signature industry, closed its Willimantic Mills plant and shifted operations to North Carolina and later Mexico. The closing exemplified a larger trend.