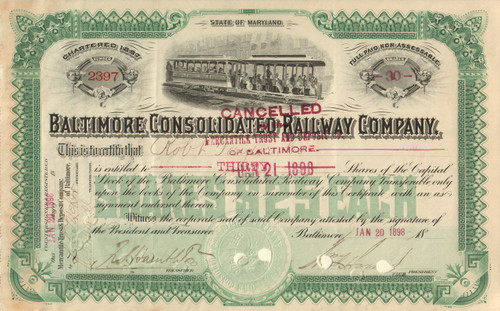 Great streetcar piece. Very nice vignette of electric trolley cars with passenger on the street with buildings in the background. Issued and cancelled. Rare example without the attached stub distraction. Dated 1898.

The Baltimore Consolidated Railway was organized on June 18, 1897 as a merger of the Baltimore Traction Company, City and Suburban Railway, Lake Roland Elevated Railway (Guilford Avenue line). The company was then merged into the United Railways and Electric Company of Baltimore City in 1899 along with other short street lines of the metro.  The companies ran independent lines with their own power stations and feeder layouts.