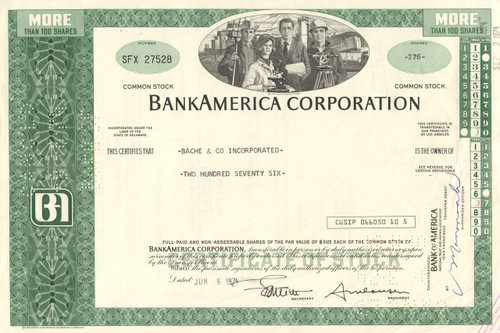 As of September 30, 1998, BankAmerica Corp. was acquired by Bank of America Corporation. BankAmerica Corp., through its network of subsidiaries, provided banking and other financial services throughout the United States and in selected international markets to consumers and business customers, including corporations, governments, and other institutions, as of December 31, 1997. BankAmerica Corp. is based in San Francisco, California.

Its Consumer Real Estate Services segment offers consumer real estate products comprising fixed and adjustable-rate first-lien mortgage loans for home purchase and refinancing needs, home equity lines of credit, and home equity loans.  The bank's 2008 acquisition of Merrill Lynch made Bank of America the world's largest wealth management corporation and a major player in the investment banking market.  The company held 12.2% of all bank deposits in the United States in August 2009, and is one of the Big Four banks in the United States, along with Citigroup, JPMorgan Chase and Wells Fargo.

The history of Bank of America dates back to October 17, 1904 , when Amadeo Giannini founded the Bank of Italy in San Francisco. The Bank of Italy served the needs of many immigrants settling in the United States at that time, a service denied to them by the existing American banks who were typically discriminatory and often denied service to all but the wealthiest.

In 1928, Giannini merged his bank with Bank of America, Los Angeles, headed by Orra E. Monnette and consolidated it with other bank holdings to create what would become the largest banking institution in the country. Bank of Italy was renamed on November 3, 1930, calling it Bank of America National Trust and Savings Association, which was the only such designated bank in the nation at that time.

Following the passage of the Bank Holding Company Act of 1956, BankAmerica Corporation was established for the purpose of owning and operation of Bank of America and its subsidiaries. Bank of America expanded outside California in 1983 with its acquisition of Seafirst Corporation of Seattle, Washington, and its wholly owned banking subsidiary, Seattle-First National Bank. Seafirst was at risk of seizure by the federal government after becoming insolvent due to a series of bad loans to the oil industry. BankAmerica continued to operate its new subsidiary as Seafirst rather than Bank of America until the 1998 merger with NationsBank.

BankAmerica experienced huge losses in 1986 and 1987 by the placement of a series of bad loans in the Third World, particularly in Latin America. The company fired its CEO, Sam Armacost. Though Armacost blamed the problems on his predecessor, A.W. (Tom) Clausen, Clausen was appointed to replace Armacost. The losses resulted in a huge decline of BankAmerica stock, making it vulnerable to a hostile takeover. First Interstate Bancorp of Los Angeles (which had originated from banks once owned by BankAmerica), launched such a bid in the fall of 1986, although BankAmerica rebuffed it, mostly by selling operations. It sold its FinanceAmerica subsidiary to Chrysler and the brokerage firm Charles Schwab and Co. back to Mr. Schwab. It also sold Bank of America and Italy to Deutsche Bank. By the time of the 1987 stock market crash, BankAmerica's share price had fallen to $8, but by 1992 it had rebounded mightily to become one of the biggest gainers of that half-decade.

In 1994, BankAmerica acquired the Continental Illinois National Bank and Trust Co. of Chicago, which had become federally owned as part of the same oil industry debacle emanating from Oklahoma City's Penn Square Bank, that had brought down numerous financial institutions including Seafirst. At the time, no bank possessed the resources to bail out Continental, so the federal government operated the bank for nearly a decade. Illinois at that time regulated branch banking extremely heavily, so Bank of America Illinois was a single-unit bank until the 21st century.

n 1997, BankAmerica lent D. E. Shaw & Co., a large hedge fund, $1.4 billion in order to run various businesses for the bank. However, D.E. Shaw suffered significant loss after the 1998 Russia bond default. BankAmerica was acquired by NationsBank of Charlotte in October 1998 in what was the largest bank acquisition in history at that time. While NationsBank was the nominal survivor, the merged bank took the better-known name of Bank of America. Hence, the holding company was renamed Bank of America Corporation, while NationsBank, N.A. merged with Bank of America NT&SA to form Bank of America, N.A. as the remaining legal bank entity.

On August 23, 2007, the company announced a $2 billion repurchase agreement for Countrywide Financial. This purchase of preferred stock was arranged to provide a return on investment of 7.25% per annum and provided the option to purchase common stock at a price of $18 per share. On January 11, 2008, Bank of America announced that it would buy Countrywide Financial for $4.1 billion. In March 2008, it was reported that the Federal Bureau of Investigation (FBI) was investigating Countrywide for possible fraud relating to home loans and mortgages. This news did not hinder the acquisition, which was completed in July 2008, giving the bank a substantial market share of the mortgage business, and access to Countrywide's resources for servicing mortgages. The acquisition was seen as preventing a potential bankruptcy for Countrywide.