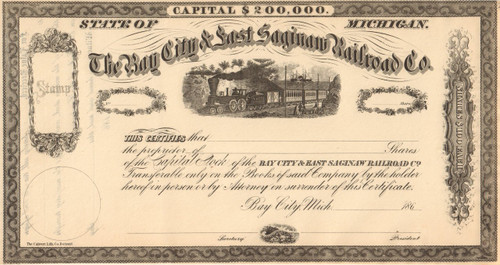 Rare railway piece. Fantastic vignette of steam train pulling passenger cars with an early steam ship in the background.  Unissued and not cancelled. Dated 186_. Circa 1964 from company records.

The Bay City and East Saginaw Railroad is a defunct railroad which operated in central Michigan before being bought by the Flint and Pere Marquette Railroad (F&PM). The company was chartered on April 8, 1864, and on November 1, 1867, completed a 13-mile railway line from East Saginaw, Michigan to Bay City. In 1868 the F&PM leased the line; in 1872 it bought the company outright.

The F&PM was chartered on January 22, 1857 as the Flint and Pere Marquette Railway for the purpose of constructing an east-west railway line on a route from Flint, Michigan to Lake Michigan at Pere Marquette. The early promoters of the road were George M. Dewey and E.H. Hazelton of Flint, with Dewey serving as the first president of the F&PM. Construction started in 1859 in East Saginaw. Service began on January 20, 1862, on the section from East Saginaw south to Mount Morris. In December 1864 the F&PM gained access to Detroit via trackage rights over the Flint and Holly Railroad and the Detroit and Milwaukee Railroad.

On September 2, 1868, the F&PM was consolidated with the Flint and Holly Railroad. Besides adding a key segment of track to the growing F&PM system, the merger brought into the F&PM the Crapo family - Henry H. Crapo, Governor of Michigan in 1865-69, and his son, William W. Crapo, later president of the F&PM.  Slowly the railroad snaked its way through the forests of central Michigan. It was completed to Clare, 24.4 miles west of Averill, in November 1870; another 15.6 miles was finished in March 1871.

On June 4, 1872, the F&PM was consolidated with the Holly, Wayne and Monroe Railroad, the Bay City and East Saginaw Railroad , the Flint River Railroad, and the Cass River Railroad. On July 1, 1879, the F&PM went into receivership, owing $1,200,000 in unpaid interest on bonds. Gross revenues had declined every year since the Panic of 1873, a situation exacerbated by the crash of the lumber market in July 1877. The company remained in receivership until September 30, 1880, when it was reorganized as the Flint and Pere Marquette Railroad.

As early as 1886 the Chicago and West Michigan Railway shared common directors with the Detroit, Lansing and Northern Railroad, which was reorganized a decade later, in 1896, as the Detroit, Grand Rapids and Western Railroad.  An agreement was reached in 1899 for the consolidation of the F&PM with the Chicago and West Michigan and the Detroit, Grand Rapids and Western with securities of the newly organized exchanged for those of the constituent companies. The Pere Marquette Railroad was incorporated November 1, 1899, and took over the properties on January 1, 1900.

Charles M. Heald of the C&WM and DGR&W was president of the Pere Marquette with William W. Crapo of the F&PM as chairman of the board of directors. On February 1, 1900, the new company acquired the Saginaw, Tuscola and Huron Railroad, which had been built in 1881-86 by investors associated with the F&PM.