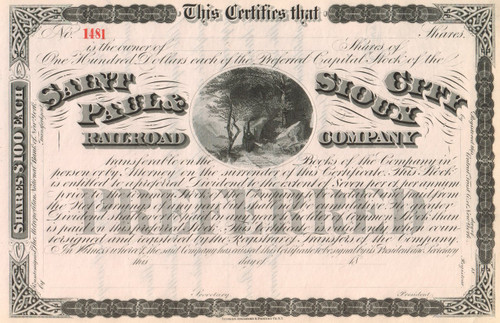 Rare historical Minnesota certificate with a vignette of a steam train rounding a wooded section of track.  Unissued and not cancelled. Circa 1869 from company records.

In 1870, there was great activity in railway circles and it was rumored that the St. Paul & Sioux City road would extend its line through southwestern Minnesota, passing just to the north of Heron Lake. This prompted some farsighted people to begin locating homesteads in the prairie country around Heron Lake. Said the Jackson Republic of April 2, 1870: "At Heron Lake, in the northwest corner of the county, there is quite a settlement; the prospect of the early completion of the St. Paul & Sioux City railroad and the possibility that it will pass in this vicinity have called here a good number of settlers."

The track of the Sioux City & St. Paul railroad was not laid through Jackson County until the fall of 1871, but in the spring of that year the route was selected and sites for stations chosen. The Heron Lake site was selected late in June, but nothing was done toward platting or building a town there until a short time before the track laying was completed in the fall. The roadbed was graded to the site in September, and surveyors appeared late in that month to survey the town site, although the plat was not put on record until the next spring. The town was surveyed by Alex L. Beach and the dedication was made by the Sioux City & St. Paul Railway company, by Elias F. Drake, its president.

As with so many roads of the post-Civil War era, the Omaha evolved out of several predecessor companies and, in turn, rapidly united with a larger railroad. This “system building” began with an amalgamation of three core local railroads that emerged in the late 1860s and 1870s: the North  Wisconsin Railway, the West Wisconsin Railway, and the St. Paul & Sioux City Railroad. Then, in 1880 and 1881, respectively, a group of out of state capitalists led by Henry H. Porter of Chicago merged the two Wisconsin lines and then the St. Paul & Sioux City to form the Chicago, St. Paul, Minneapolis & Omaha Railway. In November 1882 the group’s speculative efforts were handsomely rewarded when the much larger Chicago & North Western took stock control of the Omaha