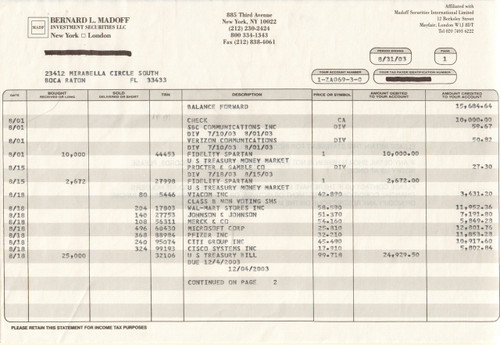 Rare piece of financial history.  These are REAL stock trading monthly statements from Bernard L Madoff Investment Securities LLC for stock transactions. Dated 2003-2004, you might wonder if these were real transactions or if these were the phony communications that Madoff sent victims of his Ponzi scheme.  Amounts, dates, and companies will vary from shown.  Customer names and accounts are obscured on the slip. Affordable items from this financial scandal. Fun gift idea for the investor or professional.

As an added bonus, you will also get a real trading slip from the company. These are trade confirmation papers from Bernard L Madoff Securities for stock and bond transactions. Dated 2008, you might wonder if these were real transactions or if these were the phony communications that Madoff sent victims of his Ponzi scheme.  Amounts, dates, and companies will vary from shown.  Customer names and accounts are obscured on the slip.

Arrested for running an elaborate Ponzi scheme in December 2008, Bernie Madoff pleaded guilty to 11 felony counts in March 2009. That summer, the 71-year-old was sentenced to 150 years in prison. Bernard Lawrence Madoff was born on April 29, 1938, in Queens, New York, to parents Ralph and Sylvia Madoff.   Madoff earned his bachelor's degree in political science from Hofstra in 1960 and enrolled at Brooklyn Law School, but he didn't last long in that endeavor; that year, using the $5,000 he saved from his lifeguarding job and a side gig installing sprinkler systems, as well as an additional $50,000 borrowed from his in-laws, he and Ruth founded an investment firm called Bernard L. Madoff Investment Securities, LLC.

With the help of Madoff's father-in-law, a retired CPA, the business attracted investors through word of mouth and amassed an impressive client list. Madoff Investment Securities grew famous for its reliable annual returns of 10 percent or more, and by the end of the 1980s, his firm was handling more than 5 percent of the trading volume on the New York Stock Exchange. The success of Madoff Securities was in part due to a willingness to adapt to changing times; the firm was among the earliest to use computer technology for trading, helping to give rise to the National Association of Securities Dealers Automated Quotations (NASDAQ). Madoff later served as NASDAQ chairman for three one-year terms.

Madoff became famous for a very different reason on December 11, 2008. The day before, the investor informed his sons that he planned to give out several million dollars in bonuses earlier than scheduled, and they demanded to know where the money was coming from. Madoff then admitted that a branch of his firm was actually an elaborate Ponzi scheme. Madoff's sons reported their father to federal authorities, and the next day Madoff was arrested and charged with securities fraud.

On March 12, 2009, Madoff pleaded guilty to 11 federal felonies and admitted to turning his wealth management business into a massive Ponzi scheme. The Madoff investment scandal defrauded thousands of investors of billions of dollars. Madoff said he began the Ponzi scheme in the early 1990s. However, federal investigators believe the fraud began as early as the mid-1980s and may have begun as far back as the 1970s. Those charged with recovering the missing money believe the investment operation may never have been legitimate. The amount missing from client accounts, including fabricated gains, was almost $65 billion. The SIPC trustee estimated actual losses to investors of $18 billion. On June 29, 2009, Madoff was sentenced to 150 years in prison, the maximum allowed.