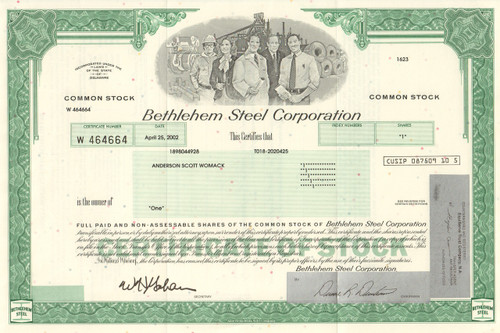 Bethlehem Steel and a subsidiary company, Bethlehem Shipbuilding Corporation, were two of the most powerful symbols of American industrial manufacturing leadership. Their demise is often cited as one of the most prominent examples of the U.S. economy's shift away from industrial manufacturing, its failure to compete with cheap foreign labor, and management's penchant for short-term profits. After a decline in the American steel industry and other problems leading to the company's bankruptcy in 2001, the company was dissolved and the remaining assets sold to International Steel Group in 2003. In 2005, ISG merged with Mittal Steel, ending American ownership of the assets of Bethlehem Steel.

In 1899, the company assumed the name Bethlehem Steel Company. In 1904, Charles M. Schwab and Joseph Wharton formed the Bethlehem Steel Corporation with Schwab becoming its first president and chairman of its board of directors. In the early 1900s, the corporation branched out from steel, with iron mines in Cuba and shipyards around the country. In 1913, it acquired the Fore River Shipbuilding Company of Quincy, Massachusetts, thereby assuming the role of one of the world's major shipbuilders. In 1917, it incorporated its shipbuilding division as Bethlehem Shipbuilding Corporation, Limited. In 1922, it purchased the Lackawanna Steel Company, which included the Delaware, Lackawanna and Western Railroad as well as extensive coal holdings.

During World War I and World War II, Bethlehem Steel was a major supplier of armor plate and ordnance to the U.S. armed forces, including armor plate and large-caliber guns for the Navy. In the 1930s, the company made the steel sections and parts for the Golden Gate Bridge and built for a new oil refinery in La Plata City, Argentina, which was the tenth-largest in the world. During World War II, as much as 70 percent of airplane cylinder forgings, one-quarter of the armor plate for warships, and one-third of the big cannon forgings for the U.S armed forces were turned out by Bethlehem Steel.

The steel industry in the U.S. prospered during and after World War II, while the steel industries in Germany and Japan lay devastated by Allied bombardment. Bethlehem Steel's high point came in the 1950s, as the company began manufacturing some 23 million tons per year. The late 1960s offered a harbinger of the troubled times to come. In 1967, the company lost its bid to provide the steel for the original World Trade Center. The contracts, a single one of which was for 50,000 tons of steel, went to competitors in Seattle, St. Louis, New York and Illinois.

By the 1970s, imported foreign steel was generally cheaper than domestically produced steel. The company faced growing competition from mini-mills, smaller-scale operations that could sell steel at lower prices. In 1982, Bethlehem reported a loss of US$1.5 billion and shut down many of its operations.  In the mid-1980s, demand for the plant's structural products began to diminish, and new competition entered the marketplace. Lighter construction styles, in part due to lower-height construction styles did not require the heavy structural grades produced at the Bethlehem plant. At the end of 1995, it closed steel-making at the main Bethlehem plant. Bethlehem Steel exited the railroad car business in 1993 and ceased shipbuilding activities in 1997 in an attempt to preserve its steel-making operations.

In 2001, Bethlehem Steel filed for bankruptcy. In 2003, the company's assets, including its six massive plants, were acquired by the International Steel Group. In 2007, the Bethlehem property was sold to Sands BethWorks, and plans to build a casino where the plant once stood were drafted.

The site of the company's original plant in Bethlehem, Pennsylvania, is home to SteelStacks, an arts and entertainment district. The plant's five blast furnaces were left standing and serve as a backdrop for the new campus.