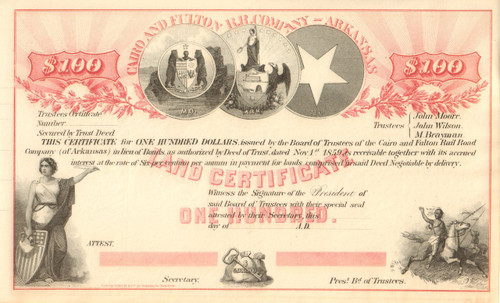 Beautiful RR stock cert with multiple vignette.  At the top are three state seals - Arkansas, Missouri, and Texas.  The bottom right has American Indians on horseback; the bottom left has an old Lady Liberty; the bottom center are money bads and a large key.  Unissued, Dated 1859 in the text of the piece. Rare, early color printing from this pre Civil War certificate.

The Cairo and Fulton Railroad was chartered by the State of Arkansas on February 9, 1853, to build a railroad line from the Arkansas-Missouri state line across Arkansas to Texas. The State of Missouri, on January 12, 1854, chartered a railroad to build a line from Birds Point, Missouri, on the west bank of the Mississippi River opposite Cairo, Illinois, to the Missouri-Arkansas state line. Construction was delayed until 1871 by the Civil War and financial difficulties. The Cairo and Fulton was reorganized in 1872 as the Cairo, Arkansas and Texas Railroad (CA&T). The new company constructed seventy miles of track from the Missouri state line to just north of Newport (Jackson County).