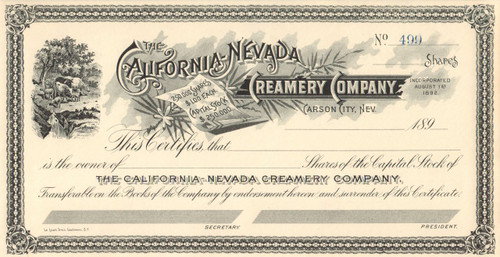 Awesome collectible with elaborate printing for the company name and a nice vignette of farm animals to the left. Unissued and not cancelled. Circa 1892 from company records. Dated 189_.

Incorporated 1892 in Carson City NV,  the company was the successor to the Nevada Creamery and Commercial Company.  The company made and sold condensed milk, cheese, and butter from milk supplied by member farms in the Carson, Mason and Smith Valleys, Nevada; Lyon County, Nevada; and Novato, in Marin County, California.  In 1893, the company began raising and selling grain and hogs.  It was a cooperative effort by a number of dairy farmers in Nevada and California to market their products and enjoy the benefits of bulk purchasing of supplies.

Dairying began in the Carson Valley in 1851 with the original Mormon settlers. They utilized the water and grassland resources to produce dairy products for both themselves and emigrants passing through to the California gold fields. Despite the importance of this industry to 19th century Nevada, there are few historical evaluations of the industry other than technical manuals on "how to" dairy.