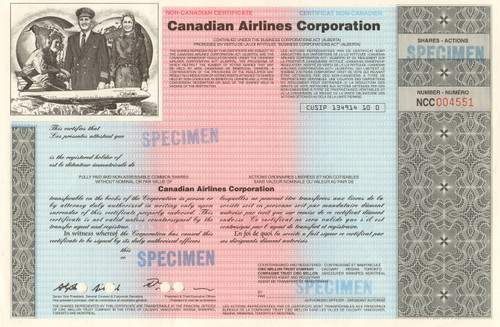 Rare sample stock certificate with nice vignette of a company jet plane in front of a pilot, stewardess, and ground crew. Text in English and French. Unissued and cancelled. Marked "Specimen" in several places. Circa 1987.

Canadian Airlines was headquartered in Calgary, Alberta, and had revenue of approximately $3 billion at the end of 1999. The airline and its aircraft were acquired by Air Canada in 2000.

Canadian Airlines streamlined its operations and went through the financial restructuring of over $700 million in debt, after the 1991 airline industry slump. On November 1, 1996, Kevin Benson, then president and CEO, unveiled a restructuring strategy to improve the profitability of Canadian Airlines. The operational restructuring plan was supposed to be phased in over a four-year period, addressing the main issues of cost control, revenue growth, capitalization and fleet renewal. It was also one of the founding members of the Oneworld airline alliance, along with Qantas, American Airlines and British Airways. The plan started off well but with the Asian economic downturn in 1998, air traffic decreased and Canadian was suffering on what was previously its most profitable route.

In its last few years of operation, Canadian Airlines extended its international route network in Asia, with the most recent expansion of service to Malaysia and the Philippines, which gave it eight destinations in Asia. At that time Canadian Airlines had the distinction of flying to more places in Asia, more often, than any other Canadian carrier. Canadian Airlines' core business strategy focused on building its Vancouver hub into the leading gateway between North America and Asia. It leveraged its codesharing agreement with American Airlines in order to help capture a greater share of U.S.-Asia traffic flows.

After continued poor performance, Canadian Airlines was acquired by Air Canada in 2000. Numerous other proposals for survival had been considered and rejected, including a competing bid led by American Airlines to purchase Canadian Airlines. American Airlines had already owned a 25% stake in Canadian Airlines, the maximum allowed under regulations. Then-American CEO Donald J. Carty, who had formerly headed Canadian predecessor Canadian Pacific Air Lines, planned to acquire a controlling interest in the new Air Canada, with the purpose of moving it from the Star Alliance to Oneworld. American has since sold its shares in Air Canada, after unsuccessfully lobbying Canadian federal government to ease foreign ownership restrictions on Canadian airlines.